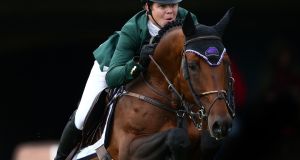 Ireland’s best result on the international stage on Friday came at Bridgehampton, New York, where Shane Sweetnam won the 1.60m jump-off class, a qualifier for Sunday’s $300,000 Grand Prix at the Hampton Classic show.

The Cork native had two horses in the class both of which jumped clear in round one, as did seven others. He went first on Main Road which again left all the poles intact, coming home in 39.42 for fourth place. However, Sweetnam improved on that time greatly with The Blue Buckle Group’s Indra van de Oude Heihoef, stopping the clock on 37.72. Mexico’s Fernando Martinez Sommer finished second on Cor Bakker (38.19) with the USA’s Devin Ryan slotting into third with Cooper (38.25).

Under floodlights in Brussels, Co Offaly-born Darragh missed out on winning an Audi Q2 in the 1.55m jump-off class where eight of the 46 starters progressed to the second round. Five riders again went clear, the fastest round being recorded by Germany’s Marcus Ehning who was home in 39.24 on Comme Il Faut 5. The host nation’s Niels Bruynseels finished second on Lady Cracotte (40.49) with Kenny placing third on Ann Thompson’s Balou du Reventon (40.84).

There was no luck for the Irish at the five-star Spanish show in Gijon where the team of Trevor Breen (Bombay), Richard Howley (Dolores), Michael Duffy (EFS Top Contender) and Anthony Condon (SFS Aristio) finished joint-fourth on a two-round total of 13 behind Spain who won following a jump-off with Italy and The Netherlands.