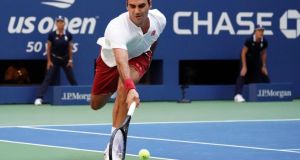 Roger Federer stole the show to put Nick Kyrgios in his place at the US Open.

The pair met in the third round in the most highly-anticipated men’s match of the tournament so far, but it proved to be style over substance as Federer raced to a 6-4 6-1 7-5 victory inside two hours.

There was still plenty to keep the Arthur Ashe crowd entertained, especially the forehand that Federer played around the net post in the seventh game of the third set that left Kyrgios open-mouthed in disbelief.

The Australian said: “It was almost unreal. It almost got to the point where I wanted him to start making shots like that, and I finally got it. If anyone else is doing those shots against me, I’m probably not too happy. But it’s Roger.”

Two days after the controversy over his pep talk from umpire Mohamed Lahyani during a second-round win over Pierre-Hugues Herbert, Kyrgios had hoped his tennis could write the headlines.

But a missed chance in the opening set, when he had Federer at 0-40 in the seventh game, proved the turning point.

Kyrgios ranted at his box after losing the first set, which he attributed to pressure.

“I got to the business end of the first set, crucial moment,” he said. “I played a terrible service game, didn’t make any first serves. It was tough. I knew how important that first set was.

“He loosened up straightaway after that. All the pressure was off him. He’s an unbelievable front-runner. When he gets in front, there’s not much you can do. He was way too good. Obviously I was not at my best, but that’s how he makes you play. He makes the court feel really small at times.”

Kyrgios certainly had a better attitude on court than against Herbert, and he can normally be relied upon to keep his focus against the big names, but he remains a hugely frustrating player who frequently favours the spectacular over the reliable.

Federer said: “You feel like you have to be the consistent guy rather than the flashy guy, just because he has a tendency to throw in the odd shot that you just don’t normally see on the tour.

Imitation has become a Kyrgios staple and, after sprinting out for the warm-up like Rafael Nadal, the Australian pulled out a Federer serve in the fourth game.

The Swiss, who next plays a rather different Australian character in John Millman, did not take offence, saying: “We have all imitated serves. Sure, it’s unusual to happen against you with your own serve.

“I knew right away, and I have seen him doing it several times over the last few months. Also that he’s been using my serve sometimes to great effect, which I’m very happy to see. It’s good fun.”

Kyrgios still does not have a coach, although he has been working with a physical trainer, and he appears open to the idea of speaking to a psychologist as he seeks the path that could see him fulfil his talent.

He said: “I have been around for about four years now. I have barely done anything. I think I can do a lot more. It’s all mental with me. If I want it enough, I have a coaching option, psychology option. I think there is a lot more things to explore. Obviously I want to achieve more in the sport.”

A quarter-final clash between Federer and Novak Djokovic seems inevitable.

The Wimbledon champion put aside the ups and downs of the first two rounds with a brilliant display to defeat Richard Gasquet 6-2 6-3 6-3 and next plays Portugal’s Joao Sousa.