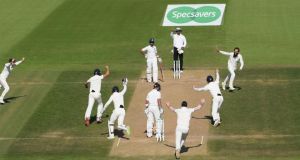 The series is won; the side that has spent much of the summer in a disturbing state of flux, sometimes drifting into ominous turmoil, is able to celebrate taking an unassailable 3-1 lead in the series after a riveting 60-run victory over India.

Trevor Bayliss, the champion coach of one-day cricket, is no longer a clown when overseeing a Test team. Joe Root is no craptain. Indeed he calmly kept his hand on the tiller on Sunday from the moment he gave an articulate interview to Sky’s Nasser Hussain before 10.0am to when Ravichandran Ashwin was the last Indian batsman to fall at 5.20pm.

When England are still in the game after three days they are a dangerous side. They seem to relish the tight finishes. The experience of the opening bowlers comes into play as they exert relentless pressure against anxious batsmen on a wearing pitch; the senior men hold their catches and in this instance Root kept a fine grip on the situation in the field.

But the match-winner in his first game of the summer was Moeen Ali, who took four more wickets to add to the five he snared in the first innings. On Sunday he dispatched the only two batsmen who caused England prolonged anxiety, Virat Kohli and Ajinkya Rahane. This was a sensational return to the side by the most popular of England cricketers inside or outside the dressing room. It was also a reminder of the virtue of picking players in excellent form in Championship cricket. The constitution of England’s best Test side remains a curious conundrum but Moeen is now most definitely in it again.

There were a few uneasy moments for Root and his team on a sun-kissed Sunday. Their overnight lead was only extended by 11 runs and although the rest of the morning went almost perfectly for England, there would be stern resistance from Kohli and Rahane that took India to within 123 runs of victory with seven wickets remaining.

England’s senior pacemen were on top of their game from the start of India’s innings as three wickets fell within 10 overs. KL Rahul received a treacherous grubber from Stuart Broad, which just glanced the bottom of his bat before thudding into the off-stump. Then Jimmy Anderson struck twice. Cheteshwar Pujara was lbw and Shikhar Dhawan well caught in the gully by Ben Stokes.

Despite this early success for the fast bowlers Moeen was introduced for the 13th over and it was soon evident why. There was a loose patch of turf just outside the right-hander’s off-stump, which prompted the ball to turn significantly, and Moeen would hit it with impressive regularity. However he needed to be patient, which he has sometimes found tricky in the past. When Kohli was on nine he was taken on the pad against an off-break and England reviewed without much hesitation. The third umpire, Joel Wilson, swiftly decreed that the bat had feathered the ball but he declined to check whether the noise had come from the bat flicking the pad, much to England’s disappointment. However given the original not out decision perhaps Wilson’s premature call was justified.

After the break England reviewed against Kohli in similar circumstances. This time it transpired that the ball, though stumps bound, had struck the pad outside the line. Now England were out of reviews and Kohli and Rahane found a way to progress. Both were watchful, skilful in defence against Moeen and prepared to advance via singles if necessary. There were very few free runs to be had even when Root allowed Adil Rashid seven overs in the afternoon.

It may seem a puzzle that Moeen should be used so much more than Rashid, but this made perfect sense in these conditions and may well be relevant to the winter’s Sri Lanka tour. When the ball is gripping, as it is bound to do in the first Test in Galle in November, the finger spinner can find turn easily enough; he is usually more accurate and quicker through the air than the average wrist-spinner. That explains the dominance of finger spinners like Rangana Herath and Dilruwan Perera in Galle. Likewise Moeen was always the better bet here.

Kohli had just tapped gloves with his partner to acknowledge a century partnership when he fell to Moeen. The previous delivery had been hit into Cook’s ankles at short leg but now the ball ballooned in the air after brushing Kohli’s glove. This was England’s solitary scalp in the afternoon session but the departure of Kohli in this series is always a decisive moment. Panic is never far away among his colleagues and, sure enough, India would subside from 123 for three to 184 all out.

After tea Stokes intervened having Hardik Pandya neatly caught by Root at second slip – a desperate captain always wills them in. Out came Rishabh Pant, who was determined not to perish in a hole as was the case in the first innings. There was a flamboyant six from the first ball he faced from Moeen; another four soon followed but then after much juggling of the field Pant was caught on the cover boundary, scything away. Next the adhesive Rahane was lbw on the back foot to another turner from Moeen, after which the only resistance came from Ashwin who was bound to attack extravagantly alongside the tail; he plundered 25 before falling to Curran, who had a surprisingly quiet day – by his current standards.