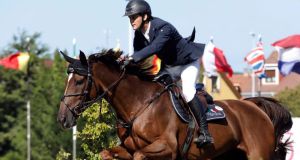 There were two good show jumping wins for Ireland on Saturday, the first coming at Gijon in Spain where Britain-based Billy Twomey claimed the 1.60m jump-off class on the Kim Barzilay-owned and bred Kimba Flamenco.

Successful on the opening day of the five-star show, Twomey and the nine-year-old mare by Je T’Aime Flamenco were one of 12 combinations to go clear in the first round and one of nine to repeat that feat in the second.

Cork native Twomey stopped the clock in 35.05 to win ahead of The Netherlands Lisa Nooren on Hocus Pocus de Muze (35.71) and her compatriot Sanne Thijssen with Bulavasco (36.10). Galway’s Michael Duffy finished fourth on Casis (36.83).

For the second day running, Cork-born Shane Sweetnam and The Blue Buckle Group’s Indra Van de Oude Heihoef won the featured 1.60m jump-off class at Bridgehampton, New York. He won in a time of 36.61 with the only other rider to break the 37 second barrier being fellow Irish rider being Kilkenny’s Richie Moloney on Rocksy Music (36.90).

Another New Zealander, Andrew Nicholson, is in fifth place on Swallow Springs (32.1), the pair being split by a trio of British riders - Oliver Townend on last year’s winner, Ballaghmor Class (27.9), Piggy French with the mare Vanir Kamira (31.1) and Harry Meade on the striking grey Away Cruising (31.1). All first five horses were bred in Ireland.

The best placed Irish rider, after a superb cross-country round which saw her complete one of just four clears inside the time allowed, was England-based Co Meath native Elizabeth Power. With the French-bred ex-racehorse Soladoun, she is now lying in seventh place on 35.1.

North Co Dublin’s Ciaran Glynn, who is making his Burghley debut, picked up 7.2 cross-country time penalties on November Night (40.8) but still moved up from 28th after dressage to 16th at close of play on Saturday. Following Sunday’s morning’s second horse inspection, before which six horses were withdrawn, Glynn moved up a further two places.

He and Power will take part in Sunday afternoon’s second session of show jumping with Joseph Murphy on Sportsfield Othello (48.1), Michael Ryan with Dunlough Striker (52.5) and Austin O’Connor on Lucky Contender (71.6) all jumping in the morning.

At home, Co Wexford’s Patrick Whelan extended his lead in the Connolly’s Red Mills SuperLeague series although only finishing third with Footfall (32.3 penalties) at Loughanmore on Saturday behind Declan Curran on Seavaghan Ash (30.2) and Steven Smith with Derryinver Girl (31.5).

1 Business as usual for Ireland as October date looks likely for Italy game
2 Strong Glasgow side a real threat to Leinster’s unbeaten record
3 Joanne O’Riordan: Mo Farah should have to face Jeremy Kyle
4 Gordon D’Arcy: Change has to happen before Ireland's trip to Paris
5 Decision day for the GAA in tight presidential race
Real news has value SUBSCRIBE