PE on school curriculum a move in the right direction 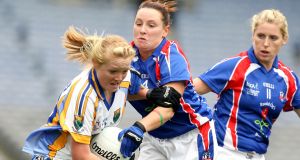 Wicklow’s Sarah Miley: she has been teaching PE at Coláiste Chraobh Abhann for the last two years. Photograph: Inpho

It’s Tuesday morning and the first day of the rest of their lives. The fifth year students at Coláiste Chraobh Abhann in Kilcoole take their seats for the first double class of the new term, and Sarah Miley hands out fresh copies of the long and complex syllabus. They see weeks of lessons around ethics and strategies and planning for optimum performance and they can’t wait to get stuck in.

There are some jokes about when they’ll get outside to play some football but otherwise they all sense their place in the history of Irish education. After several decades of hopes and promises they are among the first students to take physical education as a Leaving Cert subject – and certainly not before their time.

Miley has been teaching PE at Coláiste Chraobh Abhann for the last two years, and immediately recognised the potential when the Wicklow school was one of the 80 successful applicants to pilot the new Leaving Cert syllabus back in February: in all 369 applied, more than half of the country’s secondary schools, and the intention is to open all schools to the new subject from the autumn of 2020.

For now it’s up to teachers like Miley to make both sense and a success of it, and she couldn’t be more enthusiastic on both fronts. The first Leaving Cert PE exams will take place in June 2020, and like any other subject the hard work begins now. It helps that her own interest in sport and physical education goes far beyond the classroom, not least as the highly-rated midfielder on the Wicklow women’s football team, and the most important thing about the new PE syllabus, says Miley, is its inclusivity, rather than any perceived exclusivity, all based around what is neatly termed physical literacy.

“That first double class on Tuesday was all theory, and I think the students were a little surprised about that, but they know that’s how they’re going to learn. It’s certainly not the handy subject that maybe some of them thought it might be, because we’re actually in the classroom quite a bit, and there’s homework and Christmas and summer exams and all that too, but there’s also the strong practical element, which is quite exciting for a lot of them.

“The big difference really is that there are now 180 hours of allocated time for the Leaving Cert course, so I will see my Leaving Cert PE class four times a week, one double class, and three singles. Plus the two allocated classes of PE they’d be getting anyway. That’s a massive change.

“And I think the syllabus is very in-depth, and covers everything you’d want for a young adult. It gives them the opportunity to take responsibility for their own learning, and developing their own capacity for physical education and physical activity, and be confident and informed about how they do it.”

Of the 80 pilot schools, 18 are in Dublin, the rest spread out from St Eunan’s College in Donegal to Scoil Phobail Sliabh Luachra in Kerry. As a mixed school, Coláiste Chraobh Abhann also gets to test out the new syllabus on boys and girls – and Miley describes the interest in her class, capped at 26, as even between the two. Equally important is the piloting of the PE syllabus as a non-examinable subject for the majority of senior cycle students, which can ultimately help breathe more love and less loathing into the subject.

There is no requirement either for anyone taking PE for the Leaving Cert to be a budding young Kyle Hayes or Thomas Barr. It does help if there’s an interest in sport, but no different than having an interest in maths or art: the subject matter ranges from running to rugby, swimming to sailing, and orienteering to dancing. It’s an opportunity to do well in a Leaving Cert subject, only if the work is put in.

Miley made that clear to her students on Tuesday: “The class I have would be generally quite active anyway, some maybe not as much, but that’s not essential for the Leaving Cert course. There’s an opportunity to act as a coach, or a choreographer, as opposed to say the athlete, and I’d have a nice balance of boys and girls, with a nice range of expertise and different interests. The main thing as well is the interest from the students, their commitment, and also the interest in their performance.”

For 2020, the Leaving Cert exam will be come in three parts: a written exam on some of those strategies and planning for optimum performance will count for 50 per cent; a coaching or choreographer project will count for 20 per cent; and a digital/video project capturing their own choice of activity will count for 30 per cent.

In the meantime each class chooses three of six categories of activity, again ranging from the athletic to the aesthetic. For PE teachers like Miley that’s a welcome return to some of the fundamentals of movement: “My class choose Gaelic football (from the games element), sprinting (from athletics) and then circuits (from personal fitness). Most kids think they can run, but there is so much more to learn, in terms of coordination and balance.”

Part of the higher aim here is to address those increasingly worrying reports about the health of our schoolchildren; the 2013 survey of 36 European countries which ranked Ireland third from the bottom with just 37 hours of PE a year at primary school (compared to 108 in France); or reports last year that one-third are coming out of primary school unable to properly run, jump, throw or even catch a ball. And for a self-proclaimed sporting mad nation, something doesn’t add up when one in four Irish schoolchildren is now considered to be overweight.

“The main thing we’re trying to influence is the want and need to understand just how important physical activity is,” says Miley, “and make that a lifelong thing. It does mean extra work for me, preparing for the syllabus, correcting homework, but as a PE teacher it’s all I’ve ever wanted. Down the road I think PE facilities around the country will need to improve for this to really take off, yes, but it’s 100 per cent moving in the right direction.”

Top marks, in other words, which is certainly good enough for now.

1 Cheltenham faces criticism after racegoers suffer Covid-19 symptoms
2 Andrew Conway diary: In search of a competitive edge
3 Whole new ball game: Sport will be last duck in the row in return to normal
4 Avoid the treadmill at all costs – marathon training in the 2km radius
5 Sonia O’Sullivan: Taming The Tan gave us one last roll of the dice before shutdown
Real news has value SUBSCRIBE

Greener Pastures: Seinäjoki feels most like home for Tommy Dunne 06:30
‘Every team is in the same position – we all just want to play games’ 06:00
My favourite sporting moment: Shels finally make all the heartbreak worth it 06:00
Cycling: Rás Tailteann postponed to future date due to coronavirus 06:00
Whole new ball game: Sport will be last duck in the row in return to normal 06:00
Here is your handy guide to sport on television this week