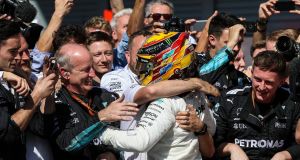 Lewis Hamilton won the Italian Grand Prix with a controlled race during which his position at the front was never under threat. He led his Mercedes team-mate Valtteri Bottas in a one-two for the team, their third of the season. Ferrari’s Sebastian Vettel could manage only third place enabling Hamilton to take the lead of the Formula One world championship for the first time this season, with seven races still to come. Red Bull’s Daniel Ricciardo put in a superb, aggressive recovery drive to move from 16th on the grid to fourth.

It is the three-time world champion’s sixth win of the season and his 59th career victory. He now leads Vettel by three points, with 238 to 235. Hamilton had tied for the lead with Vettel at the second round in China but the German has been at the top of the table since then.

After victory at the last round in Spa Hamilton is the first driver to score back-to-back wins this season and it is the fourth time he has triumphed at Monza, a circuit he counts as one of his favourites.

Hamilton had taken Michael Schumacher’s record of pole positions with his 69th on Saturday, a magnificent run at the death in treacherous wet conditions, and he backed it up by ensuring he took maximum points with an almost perfect run from pole to flag. His car was expected to be suited to the low downforce, high-speed flow of the Autodromo Nazionale and he made the most of it.

Ferrari could not hook their car up for qualifying and Vettel had started from sixth on the grid and although he fought back well to third, the gap to Hamilton was too much to bridge and the Ferrari simple could not match the Mercedes for pace. Vettel admitted he had a mechanical problem for the last 15-20 laps after going off the track.

Hamilton made a clean start and held the lead into turn one, while behind him Esteban Ocon had made the pass on Lance Stroll to take second. Kimi Raikkonen, starting from fifth, made a determined effort to pass Bottas on the opening lap but could not make it stick and the Mercedes driver pulled away and passed Stroll for third on lap three. A lap later his pace was on show again and he easily passed Ocon at the same place to take second.

Vettel moved passed Raikkonen on lap four, the Finn appearing to give way to his team-mate and quickly passed Stroll for fourth but out front enjoying the clean air and the and low-downforce trim on his Mercedes, Hamilton had 3.3-second gap to his team-mate by lap six.

Vettel remained on a charge however and passed Ocon on the start-finish straight for third place on lap eight – putting him nine seconds back from Hamilton and six from Bottas. It was a crucial for Vettel to pass the midfield drivers and having done so the major question was whether he would be able to make a dent in the Mercedes lead.

Hamilton maintained a solid three-second gap to his team-mate but Vettel could not match them. He was dropping several tenths a lap to Hamilton and the gap by lap 16 was up to 14 seconds. As had been expected the Ferrari had no answer to the power advantage Mercedes enjoy. With almost 60 seconds of the lap at full throttle, the almost 5mph advantage they had shown through the speed traps in Spa was clearly in evidence.

By lap 24 Hamilton had over 20 seconds on Vettel and looked entirely comfortable and was taking almost half a second a lap from the German, while Bottas stayed in touch with the leader just over three seconds back.

Ricciardo had made up seven places by lap seven up to ninth from 16th and on lap 17 he pulled a superb move on Sergio Perez to take fifth and set off after Felipe Massa. “I like them vulnerable,” he joked over the team radio as he chased down the Brazilian. Ricciardo, who had begun the race on the harder soft rubber, stayed out long on his first stint and after Massa pitted on lap 22, the Australian found himself pursuing Vettel, from 14 seconds back.

Vettel was the first of the leaders to pit on lap 32 and Hamilton followed him a lap later, both taking the soft rubber required in the one-stop race. Bottas followed them a lap later and Ricciardo took third place, having yet to pit but the gaps for the front runners on the same tactics remained the same. Ricciardo finally came in on lap 38 for the quicker supersoft rubber and emerged in fifth just behind Raikkonen.

He caught the Finn on lap 41 and passed him with another bravura move up the inside, late braking into turn one. Vettel was 11 seconds up the road with 11 laps remaining. Hamilton meanwhile had been managing his drive with calm skill and both Mercedes drivers had turned their engines down such was the advantage they enjoyed. The gap to his team-mate remained at just under four seconds and Vettel had been left behind, 31 seconds in arrears.

Ricciardo did his absolute best to catch Vettel but just ran out of time, he was within four seconds on the final lap but the German had done enough. As had Hamilton who delivered another victory with serene confidence and leaves Monza on top of his game and the title fight.

The second Ferrari of Raikkonen was in fifth. Ocon’s Force India was in sixth ahead of the Williams of Stroll, both drivers doing well to convert their elevated grid slots to decent points. Felipe Massa in the second Williams was eighth, Sergio Perez in the second Force India in ninth and Max Verstappen was in tenth after he took a puncture and damage on lap three after clashing with Massa at turn one.

1 Gary Neville in Qatar an exercise in semi-journalism
2 NFL Division One: Malachy Clerkin’s team-by-team guide
3 Owen Doyle: Creeping professionalism of schools rugby a threat to the game
4 Don’t think twice it’s all right: David Gillick’s advice to his younger self
5 Jürgen Klopp insists Liverpool title party is not on his mind
Real news has value SUBSCRIBE