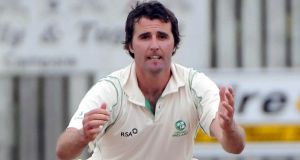 Kyle McCallan’s Man-of-the-Match performance led Waringstown to a record equalling 5th Irish Senior Cup win as they beat The Hills by four-wickets in a tense low-scoring game at Bready.

The former Irish international showed all his experience to guide Waringstown over the line in conjunction with skipper Greg Thompson as they wobbled chasing 135.

Yaqoob Ali (4-25) and Ryan Cartwright (2-33) had threatened to pull off an unlikely win for The Hills as the NCU side lost three wickets for no runs to slip from 93-3 to 93-6, with a rejuvenated Cartwright fired up at one end, and the unorthodox but highly effective Ali at the other.

The spark that ignited the mini collapse was the decision by Albert van der Merwe to position himself at silly mid-off to Lee Nelson just before the drinks break. Nelson duly obliged by bat-padding the catch to a jubilant Van Der Merwe.

That spark of home became a flame when on the resumption Cartwright seamed one past the defences of his fellow South African countryman Shaheen Khan to clip the top of off-stump, and in the same over trapped Marcus McClean lbw.

The Hills were rampant and backed by a huge travelling support the momentum was with the Dubliners.

Enter stage right the veteran McCallan, who defused the volatile atmosphere and together with Thompson set about chipping away at the 43 runs required. The pair did so hugely effectively, content to nudge and nurdle the singles and put away the rare loose delivery.

It was perhaps fitting that McCallan – now in the twilight of a glittering career as he enters his 43rd year – hit the winning runs to seal the four-wicket win and set off scenes of great jubilation among the Waringstown faithful.

McCallan was quick afterwards to pay tribute to the top order partnership of Adam Dennison (45) and James Hall (22), who added 53 priceless runs, which in the context of the game was to prove invaluable.

“I thought at the half-way stage that a score of around 160 was par, so The Hills 135 was short of what they would have expected. I knew though that it would be a challenging total if we didn’t bat well. I thought Denny (Adam Dennison) and James Hall really won the game with that crucial opening partnership, although we contrived to make it exciting with that collapse.”

McCallan also praised the resilience and talent of Greg Thompson, whose talent and battling qualities proved crucial in the melting pot.

“Greg Thompson is a brilliant fighter and while he was there at the other end it was a comfort to me. I just said we’ve just got to bat here. The pitch really didn’t have that many demons in it. Yaqoob Ali bowled great but I just played him straight rather than risk cross-batted shots, and big Ryan Cartwright hit the pitch hard. I thought myself and Greg batted quite nicely and we managed to get over the line.”

The victory saw Waringstown equal the great North County’s five competition wins - could they now go one better in 2018 and claim a sixth crown?

“I don’t see any reason why not,” said a beaming McCallan. “Simon Johnston laid a lot of groundwork here when he was coach before going to the Knights, and Greg Thompson has taken up the reins. There is a culture at the club where we are determined to bring on our own. There’s a lot of very talented young cricketers at the club. I think there’s a generation of young cricketers still to come out of Waringstown.”

Will McCallan still be involved at Waringstown as they try for that 6th Bob Kerr trophy win?

“ I’ve just got to be fair to everybody. I’ve got three young kids and I spend a lot of time with them. I just don’t want to be holding anybody back. But, when I’m playing well I want to push these young lads, and not make it too easy for them. They’ve got to get in over the old dog yet!”

McCallan and the Waringstown bowling unit had strangled The Hills who adopted a safety first approach after being out into bat by Thompson.

Shaheen Khan set the tone as he conceded just 14 runs in his ten overs spell – bowling at a reduced pace after passing a late fitness test on his side injury. he got the breakthrough as Cormac McLoughlin-Gavin was deceived by a cutter which gripped on the pitch, and picked up the wicket of the dangerous Sean terry who chased a wide delivery to be caught behind.

Mark Donegan (40) and Hamid Shah (20) took the score to 82 before Donegan fell to McCallan (3-18). With 20 overs left Hills skipper Max Sorensen held himself back in the order and that proved fatal as only 17 runs were added in the following seven overs as Waringstown tightened their grip on the game.

Sorensen did get to the middle, but by that stage 37 overs were gone and the total still hadn’t reached 100. He did hit the innings only six in reaching 24 from 30 balls, but was left stranded as The Hills innings finished with a whimper rather than the explosive bang their fans so dearly wanted.

Phil Eaglestone (2-21) bowled cleverly in the final stages while Gary Kidd took two wickets in three balls as The Hills were bowled out for135 with 15 balls unused.

The Hills displayed all their renowned fighting qualities as they did their best to defend their modest target, and they may well have succeeded but for the experience of Waringstown’s battle hardened duo of Thompson and McCallan.

“I don’t think there’s any thing like an easy final and The Hills battled right to the end there. I was just happy to get over the line,” said Thompson. “Kyle’s experience was not just vital today but it has been throughout the season.

“I thought they were going to get to around 180 but our bowlers did their job and we held our catches when it mattered.”

There’s action again at Bready on Sunday when Malahide and Terenure meet in the National Cup final - play at Bready gets under way at 12.30.

Meanwhile, Leinster completed a dream return to Division One cricket by taking the title thanks to a five-wicket win over North County at Rathmines on Saturday.

Opening bowler Joe Carroll was the star turn, returning incredible figures of seven for 35 as County were bowled out for 167, with Eddie Richardson making a brilliant 88 while the wickets tumbled around him.

Ireland international George Dockrell top-scored with 42 as Leinster got home with almost 10 overs to spare to claim their first title since 2012.

At Magheramason, Waringstown beat The Hills by 4 wickets