Ireland face prospect of relegation after defeat to France 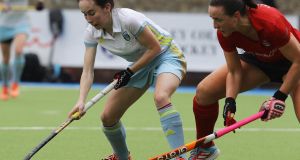 Ireland’s Junior Green Army conceded a late goal to France to put them in serious danger of relegation from the European Under-21 Championships with a potential knock-on effect for the 2020 Junior World Cup.

Yohanna Lhopital swept home with two minutes to go at a rain-drenched Valencia, one that looked to have come off a French foot in the build-up.

Ireland had more of the game but found chances scarce on a slow surface. Abbie Russell’s close range effort was smothered by Mathile Petriaux while Sorcha Clarke’s shot hit the side-netting from a narrow angle.

Two penalty corners also went incomplete before France struck on the counter for their goal.

It leaves Ireland destined for the relegation pool where they will need to beat higher ranked opposition, a tough ask.

“You don’t know what else will happen,” coach Dave Passmore said. “We obviously didn’t want to lose the game but we are still in it. The girls are a really strong, tight group and they will pull themselves together.”

They play Germany on Thursday at 8am (Irish time); the Irish men are in action on Wednesday against Austria at 8am.