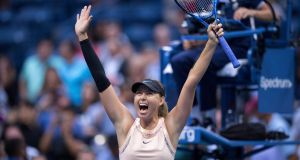 Maria Sharapova marches on in a Grand Slam comeback that has bristled with drama and style in two matches on the tournament’s main stage, as she makes the numbers as feverishly as she did before her 15-month suspension for failing a drugs test.

However, the two-times finalist here and former world No 1, Caroline Wozniacki ( who lost to the game’s supreme giant-killer, Ekaterina Makarova, in a late-night struggle on an outside court hours after the top-drawer wild card was soaking up the applause on Arthur Ashe) echoed the sentiments of many when she accused the United States Tennis Association of giving the Russian preferential treatment.

“I think putting out a schedule where the No 5 in the world is on court five, fifth match on, I think that’s unacceptable,” she told the website of the Danish paper Ekstrabladet, in a video interview on Wednesday night after Makarova had beaten her 6-2, 6-7 (5), 6-1, in a match that started at 9.50pm and finished after midnight.

“When you look on centre court, I understand completely the business side of things and everything, but someone who comes back from a drugs sentence and, you know, performance-enhancing drugs, and all of a sudden gets to play every single match on centre court, I believe is a questionable thing to do. I think it doesn’t set a good example.

“I think someone who has fought their way back from injury and is five in the world deserves to play on a bigger court than court No 5. Finally they moved us to court No 17, which is a really nice court, actually, and we had a great atmosphere out there. But, yeah, I think they should sometimes look into what they need to do in the future.”

Makarova, 29, had won only two of 16 sets in seven straight losses to Wozniacki but struck 52 clean winners and broke her six times from 13 opportunities in two hours and 20 minutes. She has had an extraordinary run against elite players this year: 9-2 against top 10 opponents, while 0-5 against those ranked 11 to 20.

Wozniacki was one of six remaining players in with a statistical chance of finishing the tournament as world No1.

Makarova, who next plays Carla Suarez Navarro, is ranked 40 in singles and No3 in doubles. Her compatriot Sharapova, who won this title 11 years ago, is ranked 146 in her comeback run and has the American world No 139, Sofie Kenny, in the third round on Friday.

Meanwhile, the tournament favourite and reigning Wimbledon champion, Garbine Muguruza, had to wait until early evening before being allocated a court, because of the backlog of matches caused by rain wiping out most of the schedule on Tuesday.

The Spaniard’s mood might have been lifted by an easy 6-4, 6-0 win over the world No92, Duan Ying-Ying of China, in just over an hour.

“It was a very tricky day because I came very early not knowing what was the situation,” Muguruza said. “I know my match was to be arranged there, like, in a corner. We were in the gym at almost 10pm. At the end it was the court that was finishing earlier. I’m happy it was Grandstand. Nice court, and it’s not that late.”