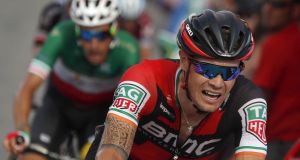 However Ireland’s Nicolas Roche (BMC Racing) - who had begun the day in third, 36secs behind - finished 4:17 behind Lopez on the stage to fall to 11th overall, 4:45 adrift, and see his podium hopes effectively come to an end.

He said: “Even though I was riding on the front, I was already struggling on the first climb. But I fought to stay as much as I could in the front part of the group. Once we hit the last climb and the pace went up, my legs were like two blocks of cement. I had to limit my losses.”

Roche finished Wednesday’s 11th stage in 28th place: “Obviously it is quite disappointing, but it is bike racing,” he said. “Unfortunately it happened to me before, in the Vuelta 2013.” Roche said he lost six minutes then. However he still finished fifth overall, and will aim to move back up the general classification in the stages ahead.

Froome’s second-placed finish, 14 seconds behind Lopez, was accompanied by six bonus seconds and time gains over many of his rivals as his overall advantage grew to one minute 19 seconds.

Froome is seeking to become only the third person to win the Tour-Vuelta double in the same year and the first since 1978. The Tour of Spain was moved from April to its present post-Tour position in 1995.

Froome had held a 36-second lead over Colombia’s Esteban Chaves (Orica-Scott) entering the 11th stage of the race, which finishes in Madrid on September 10.

The mountainous route offered an opportunity for Froome’s rivals to claw back some time, but the Briton proved strong once again.

Vincenzo Nibali (Bahrain-Merida) accelerated on the final ascent but Froome bridged the gap.

Lopez surged and Froome, aware the Astana rider is not an overall threat, was content to allow him to push on for the stage win.

Nibali, who won La Vuelta in 2010, was then beaten to the line by Froome as the Italian finished third to gain four bonus seconds.

Holland’s Wilco Kelderman (Team Sunweb) was fourth, also 14secs behind but without any bonus time.

Chaves finished 17th on the stage, 2mins 05secs behind Lopez to fall 2:33 behind Froome overall. He dropped to third overall behind Nibali.