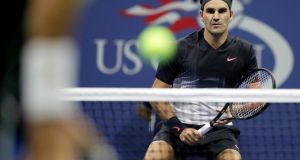 Roger Federer returns to Feliciano Lopez during their third round clash at the U.S. Open in New York. Photo: Julio Cortez/AP

Roger Federer got his US Open campaign back on track but there was another battle for Rafael Nadal as they edged closer to a semi-final meeting.

After being taken to five sets in his opening two matches, Federer only needed an hour and 46 minutes to dismiss Feliciano Lopez 6-3 6-3 7-5.

The third seed’s movement was much improved and he made far fewer unforced errors as he set up a last-16 clash with German Philipp Kohlschreiber.

Federer said: “I struggled the first couple of rounds, but that had something to do with my opponents as well. I think I played a very clean match tonight, I couldn’t be happier.

“To win in straight sets against Feliciano, who’s been such a tough competitor over the years, is such a great feeling.”

The night session was two and a half hours late starting after three long matches in the day, the last of which saw Nadal again recover from a set down.

The world number one has looked shaky so far and, after his struggle against Taro Daniel in round two, it was a similar story against lucky loser Leonardo Mayer.

The Argentinian took the opening set on a tie-break and it was not until Nadal finally converted his 14th break point to lead 4-3 in the second that the Spaniard turned on the style.

The Spaniard, who again was not happy with his forehand, said: “You need matches like this. I am in the second week. That’s the important thing. I’ve already won three matches in a row.

“I think the best thing is I had a lot of moments to be very frustrated in the match, and I was not. I was just fighting for the next point and with the right mentality, with the right spirit of fight in all moments.

“I know I have a tough opponent out there now, because he is going to play aggressive. He’s very tough, he has a lot of talent, and he’s playing well.”

Dolgopolov, who beat Viktor Troicki 6-1 6-0 6-4, is one of the more surprising names in the fourth round and the Ukrainian’s run comes despite the match-fixing investigation hanging over his head.

Dolgopolov’s match against Thiago Monteiro at the Winston-Salem Open attracted suspicious betting patterns and he was involved in a heated press conference after his first-round win.

He was pushed again by the media on Saturday and things became fiery when he was asked whether he had ever been approached to throw a match.

Dolgopolov, who gave a vague answer on Wednesday before shutting down the topic, said: “I already said everything that could be said, and you guys want to give me again the same questions.

“I’m not going to be talking about gambling. You have other questions or not? We’re finished.”

It is eight years and three wrist operations since Juan Martin del Potro lifted the trophy at Flushing Meadows as a 20-year-old.

Eighteen months into his latest comeback, Del Potro has had to learn the virtue of patience, but his form in New York suggests that is finally paying off.

The Argentinian, who has missed 10 of the last 15 grand slam tournaments, is yet to drop a set and eased into the fourth round with a 6-3 6-3 6-4 victory over 11th seed Roberto Bautista Agut.

Del Potro said: “I just came to try to get better and I’m surprising myself. It’s a very special tournament to me. I’m getting good energy from the crowd in every match, and I’m feeling every day much better with my game.

“I think I played the best match of the tournament. I hit so well my forehand. I served well during the whole match. I played very smart with my slice. I came to the net very often, tried to be aggressive all the time, and I think I played well.”

Next up for Del Potro is a repeat of last year’s fourth-round meeting against sixth seed Dominic Thiem, which the Argentinian won when his opponent retired.

Andrey Rublev became the second teenager to reach the last 16, the Russian following up his big win over Grigor Dimitrov by defeating Damir Dzumhur 6-4 6-4 5-7 6-4.