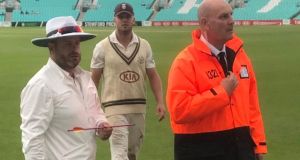 An umpire picks up the metal-tipped arrow which was fired onto the pitch at the Oval during the County Championship match between Surrey and Middlesex. Photo: Twitter

Play has been suspended in Surrey’s County Championship clash with Middlesex after a “crossbow bolt landed on the square” at The Oval.

With Middlesex pair John Simpson and Nick Compton batting midway through the final session of the Division One encounter, the players were ushered inside after a projectile was fired into the ground from outside.

Bowler Stuart Meaker was the first to raise the alarm, writing on Twitter: “Well...we have just officially gone off the field because a metal tipped arrow just landed on the pitch!!”

The County Championship then wrote: “Play suspended at Kia Oval after a ”projectile“ was fired into the ground from outside. Fans urged to move indoors. We’ll keep you posted”

Middlesex said: “Play suspended at the Oval on advice of security. Players have left the field after a crossbow bolt landed on the square.....”

A Surrey spokesman said: “We were about to bowl the next ball and the arrow appeared two pitches to the side of the pitch we’re playing on at the moment.

“The umpires took it out of the ground and got the players off as quickly as possible.

“Everybody in the ground has now been asked to take cover, there is nobody out in the stands or out in the open in any form.

“The police are on their way.

“We don’t know much more at the moment. We’re not sure if it’s deliberate or accidental or whether it’s come from inside or outside the ground.”

Irish players Paul Stirling and Tim Murtagh were in the Middlesex team with Stirling earlier bowled out for 12 while Murtagh was yet to take to the crease.

The Oval is now in lockdown, with a correspondent at the ground saying that security are searching the stands.

Scotland Yard said it had been called to “reports that an arrow or crossbow bolt had been loosed into the Oval Cricket ground”.

It said no injuries had been reported and the ground was being evacuated.

In a statement, the force added: “At this early stage it is believed that the object came from outside of the ground.

“There have been no arrests.

“We retain an open mind as to motive. Enquiries continue.”

Pictures on social media appeared to show armed police outside the venue.

England and Middlesex batsman Nick Compton joked on Twitter: “Sir Robin of Loxley has just arrived at the Oval.”