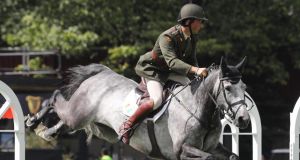 The Co Waterford-born rider recorded the only double clear in the 28-runner class on the Minister for Defence’s 13-year-old Ard VDL Douglas gelding Dollanstown. Jenny Rankin and Baccarat produced the fastest four-fault score of the jump-off (42.53) to finish as runners-up, while Greg Broderick and Chinook placed third on with one fence down in 42.57.

Rio Olympian Broderick and the Molly Tracy-owned 10-year-old gelding Chinoo, topped the final league table after a season which included victories at Ballinasloe, Cork and Balmoral. Nicholas Butler and Vimminka finished second in the league.

The Irish team of Shane Breen (Ipswich van de Wolfsakker), David Simpson (Keoki), Cameron Hanley (Quirex) and Anthony Condon (Balzac) finished third in Saturday’s five-star Nations’ Cup at Gijons in Spain. The quartet were joint-sixth after the first round but, with three clear rounds, improved to third in the second, completing on a score of 12 faults behind France (four) and The Netherlands (eight).

In eventing, there were major changes to the leaderboard following Saturday’s cross-country phase of the four-star Land Rover Burghley horse trials in Lincolnshire, England.

The rankings are now topped by three British riders headed by Oliver Townend who, last to compete on Saturday, picked up 0.4 of a time penalty to be on a two-phase total of 40.6 with the Irish Sport Horse gelding Ballaghmor Class, a 10-year-old by Courage II.

The bay was bred in Co Limerick by Noel Hickey and was first produced here by Kathy Charlton who, in partnership with Judy Tobin, purchased the horse at the elite sale of eventers at Tattersalls in 2010.

Gemma Tattersalls was clear within the time to be in second place going into Sunday’s concluding show jumping phase on the Irish-bred thoroughbred Arctic Soul (43) with Izzy Taylor next in the reckoning on Trevidden (45.3). The only other completely clear round was recorded by Britain’s Tina Gifford who was first out on the cross-country track with Star Witness (53.2), another Irish thoroughbred.

New Zealand’s Mark Todd, who led after dressage, was up on the clock with Leonidas ll when he was unseated on landing over the brush at the Discovery Valley (fence 26) while Germany’s third-placed Michael Jung and La Biosthetique Sam made the first mistake of their championship career with a runout at a skinny brush in the Trout Hatchery and subsequently retired.

New Zealand’s Andrew Nicholson had a fall with his first ride, Qwanza, at the new Storm Doris fence - angled logs from a tree which fell in the February storm - but is in sixth with his Badminton winner Nereo (47.1), behind compatriot Tim Price with the ISH gelding Ringwood Sky Boy (46.5) and Britain’s Piggy French on the ISH gelding Vanir Kamira (46.9).

Hillsborough’s Clare Abbott was lying 12th overnight having added 15.2 time penalties to her dressage score of 48.1 on the McKay family’s home-bred Europrince with England-based Alan Nolan back in 30th with Bronze Flight (93.9). Sarah Ennis, who was best-placed of the Irish trio after dressage, picked up 43.2 time penalties with BLM Diamond Deluxe which she decided to withdraw before Sunday morning’s horse inspection.