Rowing: O'Donovan brothers may be split up for World Cup 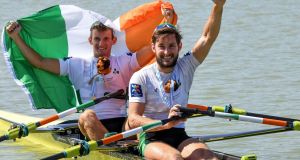 The O’Donovan brothers are an iconic duo. In the mind of the public, inseparable. Gary and Paul are a team, two siblings who get on so well they finish each other’s sentences.

But international selection in rowing does not work like that. Even if the Ireland lightweight double took silver at the Rio Olympics and are the world champions, they must yield to any crew which proves itself better.

There are four outstanding lightweight rowers in Ireland. The McCarthy twins, Jake and Fintan (22) – they also come from the same area near Skibbereen and get on well with the O’Donovans – finished fifth in a lightweight double at the European Championships.

They grabbed their chance as Paul O’Donovan was doing medical exams. Gary, recovering from a wrist injury, competed in the lightweight single.

At the Ireland trial this week to select the team for the World Cup in Rotterdam next month, the O’Donovans bested the McCarthys – just. But then Fintan McCarthy joined Paul O’Donovan in the boat. It looked stunningly good: to this eye, better than the O’Donovans in the previous test.

Since 2015, when they qualified the boat for Rio, when both O’Donovans have been available they have formed the lightweight double.

Being a selector at this level involves making tough decisions. Come the announcement of the Ireland team for the World Cup in the next few days, the names on the sheet may not be the usual ones.

The World Championships are a bit away, in August/September, and decisions will again have to be made.

One of the features of the trial was that Irish rowers in American universities made themselves available at the remarkably balmy National Rowing Centre. Daire Lynch of Yale and James Quinlan of Princeton would be good additions to most international programmes.

The World Under-23 Championships are in Sarasota-Bradenton in Florida next month and the availability of overseas competitors might move Ireland up a notch.

The six Irish women who competed at the World Cup in Poznan did not, of course, trial this week.

Decisions also have to be made on which crews, if any, join Sanita Puspure on the openweight women’s side.

The cancellation of Cork Regatta late last evening puts the tin hat on a season ravaged by bad weather.

Erne Head was one of the few early-season events to survive the weather – and even that was run in a weather window which opened after very poor conditions as the crews rowed up to the start.

The cancellation of Cork is unfortunate as it had already been rescheduled from last weekend. The regatta secretary, Denis O’Regan, says that this time out there were two major factors: safety for the mainly young crews and the direction of the wind, which was to blow across the course.

The regatta could have started tomorrow, but the conditions were to worsen through the day. Sunday was to be worse again.

Thus the organisers went for the safe option of cancelling.

There is a strong Irish interest in today’s qualifiers at Henley Royal Regatta.

Enniskillen have entered boys’ and girls’ quadruples in the Fawley and Diamond Jubilee, and both have been asked to qualify.

UCD’s women’s eight made it through to the quarter-finals at Henley Women’s Regatta, where deficiencies in equipment cost them, but today they can test their speed in the Remenham for open eights.

Belfast Rowing Club and Lagan Scullers will have a go in the Britannia and the Prince of Wales, respectively, and the NUIG/Skibbereen pair of Sadhbh O’Connor and Natalie Long have been asked to qualify in the Hambleden Pairs.

The dinner to mark the 150th anniversary of Metro Regatta which was set for tonight has had to be cancelled. Many of those set to attend were to be in Cork for the regatta.

On Tuesday (July 2nd), the National Rowing Centre will host the official launch of the Irish Coastal Rowing Championships, which will be held at the venue on August 23rdand 24th.