Jenny Egan misses out on a medal in Minsk

Egan finished strongly but misses place on the podium 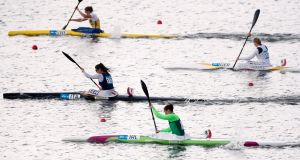 Jenny Egan has had a fine run this season, with bronze and silver medals in the K1 5,000 metres in World Cup events. Yesterday, however, she came up just short, finishing fourth at the European Games in Belarus.

Egan had her heart set on a medal after her fourth-place finish in the European Games in Baku in 2015.

“It’s disappointing. Fourth again. It’s tough,” she said. “I gave it my all. There was nothing more I could do.”

“I had to take a big turn right (and) lost the position. I had to work really hard to catch back up. It was good to catch up to fourth, but I was disappointed to just miss out on a medal.”

Home competitor Maryna Litvinchuk took the lead early and held off a strong, long-term, challenge by Dora Bodonyi of Hungary, who eventually took silver. Mariana Petrusova of Slovakia latched on to the two leaders and took bronze. Egan sprinted strongly from the following pack coming to the line, but the gap was too big.

Ronan Foley finished 16th in the final of the men’s K1 5,000 metres. The race had an exciting finish as Fernando Pimenta of Portugal looked set to win only for Balint Kopasz of Hungary to find blistering finishing speed and take the gold.

Egan had two B Finals earlier in the day, finishing eighth in both the K1 500 metres and K1 200m which placed her 17th overall in the two Olympic disciplines.

1 The Offload: Saracens prove Pro14 is not fit for purpose
2 Two in custody in Tour de France doping investigation
3 Gabriel Jesus gets Man City over the line against Wolves
4 Dreal Deal’s Navan win to be investigated as huge gamble lands
5 Born to ride, born to win: Sam Bennett, the making of a green machine
Real news has value SUBSCRIBE