Since 2002 Federer, Djokovic, Nadal and Murray have been only winners of men's title 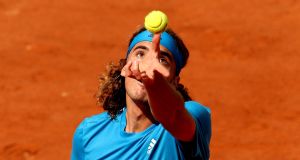 Stefanos Tsitsipas: Currently ranked sixth in the world and seeded seven for Wimbledon, the 6ft4in Greek player is as elegant as he is powerful. Photograph: Adam Pretty/Getty Images

No one was to know it. But when Lleyton Hewitt last yelled an audible obscenity on Centre Court, thumped his chest and screamed ‘Come on Rocky’, only four different players would go on to win Wimbledon over the next 16 years. When this year’s Wimbledon championship ends in two weeks, there is more than a strong likelihood 16 will have become 17.

Other than Roger Federer, Novak Djokovic, Andy Murray and Rafa Nadal nobody else has won the Wimbledon singles title since the street fighter Hewitt in 2002, a year after Goran Ivansevic scripted a beautiful tennis story and plundered the title as a wild card entry, a left arm in rag order and 212 aces. Beating the housewives’ choice Pat Rafter in a Monday final was quite the exit for the choleric champion.

Since Hewitt, it has been a humbling experience for the contemporaries of the current tennis gods. Now a generation further on and a newer wave of players led by Austrian Dominic Thiem and Germany’s Alexander Zverev, ranked four and five in the world, gather like jackals eagerly looking in on a recent lion kill but daring to go no further.

For those players and others the three alpha males remain ageless and ever aware. Federer will be 38 in August. He won another title last week in Halle. Ho hum.

Tennis has found itself in a strange place, especially as Wimbledon comes around and exposes the game to an audience that although faithful do not always devoutly follow.

There’s a growing swirl of talent who could easily convert that potential into a daring run.

Thiem, who a few weeks ago was beaten by Nadal for the Spaniard’s 12th French Open title, and Zverev may have the highest profile. Theirs is an emerging group pressing the Grand Slam case but without much success and struggling for name recognition.

The elegant 20-year-old Greek player Stefanos Tsitsipas, 23-year-olds Karen Khachanov and Daniil Medvedev and 22-year-old Borna Coric are others among the top 20 collecting scalps at the lesser events. So, not for the first time, the Wimbledon narrative over two weeks will have a running boys to men sub plot with some evidence available that they are finally, maybe, tentatively ready for it.

Earlier this year Tsitsipas beat Nadal in Madrid and Federer in the Australian Open. Thiem defeated Djokovic in five sets in the French Open semi-final and ousted Federer in the quarter-finals of the Madrid Open as well as taking the scalp of Nadal in the semi-finals in Barcelona on his way to winning the tournament.

While there is an enduring fondness and respect for the thirtysomethings, there’s a growing swirl of talent who could easily convert that potential into a daring run. But of the close to half a million fans that walk through the gates of the All England Club over 14 days and picnic in the rain on Henman Hill, how many of that tennis group could they identify.

A more striking set of figures that details the struggle to unseat the top four reaches back over 15 years across all the Grand Slams? The elders Djokovic, Nadal, Murray and Federer have won 55 of the available 62 events since the Australian Open at beginning of 2004.

Gaston Gaudio (1), Marat Safin (1), Juan Martin del Potro (1), Marin Cilic (1) and Stan Wawrinka (3) are the only players in that time to have broken the Grand Slam stranglehold.

The result is that tennis has been left with a void of major champions in the generation that should have by now if not succeeded the ‘Big Three’ (Murray is recovering from surgery), at least have troubled them enough to barge into view.

As a consequence the professional tour (ATP) set up the concept of a ‘Next Gen’ tournament for players below the age of 21 and it has been marketing them worldwide. The third event takes place in Milan in November.

It could be dispiriting. German player Zverev, a 6ft, 6 in son of former Russian professional players, has won 11 career titles. But in Grand Slams the 22-year-old’s best performance has been the quarter-final finish in both Wimbledon and the French Open last year. He has also made round three at the US Open and the fourth round at Wimbledon and in Australia.

Thiem has lost two French Open finals and made the quarter-finals at the US Open last year. Korean Hyeon Chung, now 23-years-old and winner of the 2017 Next Gen Finals, made the semi-finals at the 2018 Australian Open and no better than the third round of the other three Grand Slams.

As the cathedrals of the sport around the world continue to change their structures, with the three-year renovation of Wimbledon’s number one court now complete with a movable roof, the actors do not. Last year’s beaten Wimbledon finalist and this year’s fourth seed, Kevin Anderson spoke about one of the difficulties, transitioning from the regular three set pro-tour matches.

“It is more challenging because it’s five sets. It definitely helps more experienced players,” said the South African. “There have been so few guys in the finals of Grand Slams in the last 15 years, they have so much experience in those situations that they feel very comfortable. It’s very tough to beat them specifically at Grand Slams.”

Last week at the Queen’s Club Championships, Tsitsipas lost to Felix Auger-Aliassime 7-5, 6-2 in the quarter-finals. Canadian Auger-Aliassime, at 18-years-old, became the youngest player in 20 years to reach the semi-finals of the tournament.

Zverev, Coric and Khachanov all made the quarter-finals in Halle, Medvedev the semi-finals at Queens, where he lost to 34-year-old French player Gilles Simon. It seemed for Simon that 34-years-old was too young and Feliciano Lopez not only teamed up to win the doubles with Murray but also won the singles becoming the first player since 1997 to complete the double. At 37-years old spritely Lopez jumped 60 places in the world rankings and was the highest ‘mover of the week.’

Early this year before the first slam in Australia, convictions were firming up among the tennis glitterati that this season was to be like the third day of a golf major. It was predicted that 2019 would be moving day where the younger players would finally position themselves for the takeover.

“There’s certainly something in the air, that the young guys are going to break through at the Grand Slams – especially this year,” said Boris Becker, who won Wimbledon as a 19-year-old.

The theme of Becker and others was twofold, that incredible young talent was seeping though and the reduced invincibility of the big three meant change would arrive sooner rather than later. Djokovic reacted first in Australia, Nadal even more brutally in Paris.

Murray went on to suffer a career-threatening hip injury which may yet prevent him from getting back to the top and while the others have suffered body troubles – Djokovic’s elbow, Nadal’s knees and Federer’s knee, twisted while running a batch for one of his children – their ‘course management’ has been impeccable.

Federer took six months in 2016 and missed the French Open for two years running, tearing down accepted paradigms about extended periods away from the game as the harbinger of a career’s end. Since then all but Murray have all repositioned with only Grand Slam titles in mind.

“I believe this year will be the year that you are going to see one of these young kids break through,” said seven-time Grand Slam champion and television analyst John McEnroe.

“The door is open, if you look at the rankings, you have a lot of players positioned to make a big breakthrough. I believe there will be a changing of the guard this year. Whether it’s Zverev, or one of the others like Khachanov or Tsitsipas, you’re going to see them do something big.

“The game has become more physical and the ball has been struck faster – it’s just become more difficult for a young kid to be able to stand up to that for seven matches,” he added. “It takes time to not only develop your skills but also develop your body. I think Zverev has the best team around him, he has dealt with the most amount of pressure compared with the other younger players.”

McEnroe, at least, tempered his volatile personality enough to win, while self- destructive 24-year-old Nick Kyrgios cannot. Kyrgios should be among the threats this coming week. If he doesn’t beat himself up how timely a victory would be. Two profane, Aussies, Hewitt and Kyrgios blistering the Centre Court paint with obscenities and bookending 17 years of a Wimbledon cartel.

Stefanos Tsitsipas (20)
Currently ranked six in the world and seeded seven for Wimbledon, the 6ft4in Greek player is as elegant as he is powerful. Like Thiem he has a one handed backhand and made it to the final of the Madrid Open where he lost to Djokovic having beaten Nadal and Zerev along the way.

Karen Khachanov (23)
The Russian is ranked nine in the world and seeded 10 this week. A fan of Conor McGregor, the 6ft6in ’ power player made the quarter-finals at Roland Garros, where he lost to Thiem. He has won four career titles with his straightforward robust game played from the baseline.

Dominic Thiem (25)
Currently ranked four in the world, the Austrian has twice made the finals of Roland Garros, losing in four sets to Rafa Nadal this year but beating Djokovic in the semifinals 6-2, 3-6, 7-5, 5-7, 7-5. Right-handed with a one handed backhand, he is seeded fifth for this year’s championship.

Alexander Zverev (22)
. He last won in May on clay in Geneva and lost to Djokovic in the French Open quarter-final. He made the third round last year at Wimbledon.