Having missed chance to win four Grand Slam tournaments in row, the Serb says he heads to Wimbledon almost devoid of pressure 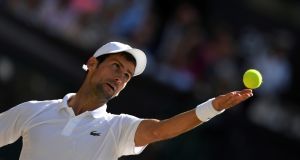 Serbia’s Novak Djokovic: “this year the exertions of a lengthy claycourt season prompted me to skip Queen’s and go straight to Wimbledon.” Photograph: Reuters/Tony O’Brien

Lack of grass courts in Serbia will not be detrimental to Novak Djokovic’s bid to defend his Wimbledon title, the world number one said in the early stages of his training for the July 1st-14th tournament at the All England Club.

“Find me a grass court in Belgrade and I will practice there,” Djokovic joked when asked last week by reporters why he chose a hard court complex in the Serbian capital’s centre to start his preparations.

“We don’t have any in Serbia, do we? I am really hopeful that we will build some grass courts soon enough, but these hard courts will do for the time being.

“The reason I am training here at the moment is because it’s the most similar surface to grass in terms of ball speed and player movement.”

Djokovic, who is aiming for a fifth Wimbledon title and his 16th Grand Slam crown, plans to play only one or two exhibition matches in the build-up to the grass court major.

Asked why he changed the routine and skipped this year’s Queen’s tournament in London, Djokovic pointed out that whereas he needed as much action as he could get ahead of last year’s tournament, he opted for a different approach in 2019.

“The situation is a bit different this time because I played very few matches prior to last year’s Wimbledon due to my injury and the elbow surgery.

“I plummeted down to 22nd on the ATP Tour but the extensive layoff gave me enough time to prepare for Wimbledon by entering the Queen’s tournament as a warm-up. This year the exertions of a lengthy claycourt season prompted me to skip Queen’s and go straight to Wimbledon.”

Djokovic was exchanging stinging basesline shots with compatriot Viktor Troicki, a close friend and also a member of Serbia’s 2010 Davis Cup winning team, in hot and humid conditions which he said would play into his hands.

“I can’t really complain because I chose to come to Belgrade this time to see my family en route from the French Open to London.

“The weather could actually be a blessing in disguise because it will probably be much cooler in London, so training in this searing heat might increase my fitness levels.

“That aside, grass is the rarest surface we play on, and it requires a very specific routine and style of play. It requires a different approach and adaption time.”

Having missed a chance to win four Grand Slam tournaments in row for the second time in his career when he lost to Dominic Thiem in last month’s French Open semi-finals, Djokovic said he was heading to Wimbledon almost devoid of pressure.

“I put a lot of pressure on myself before the French Open to make it four Grand Slams in a row again, but having failed this time I am going to Wimbledon with less weight on my shoulders as it’s the start of a new cycle.

“I always have the highest ambitions, and this year is no different. I am top of the rankings and defending my Wimbledon title, hence I am hoping to go all the way again.

“However, reality can be very different. Apart from the usual suspects, there is a bunch of other players who are strong contenders at Wimbledon.

“Federer and Nadal are always among the top candidates of course, and the three of us should be the favourites to win the title. It will be a tough tournament, and I will have to take it one step at a time, match by match.”

Eight-time champion Roger Federer was confirmed as the second seed for Wimbledon on Wednesday, bumping Rafael Nadal down to third despite being ranked below the Spaniard.

Defending champion Djokovic tops the draw, while new world number one Ash Barty is top seed in the women’s singles.

South African Kevin Anderson, runner-up to Djokovic last season, is fourth seed despite falling to eighth in the ATP rankings as Wimbledon used its special formula once again.

Twice Wimbledon champion Nadal will be seeded three, meaning he is likely to have to beat both Federer and Djokovic to claim his first title at the All England Club since 2010.

The Spaniard was critical of the Wimbledon’s seedings formula this week, saying “it’s not a good thing” that the grass court event is the only one of the four Grand Slams that does not stick rigidly to ATP rankings for seedings.

Wimbledon uses form over the past 24 months on grass to tweak the positions of the top 32 players in the men’s draw.

While the women’s seedings are in line with the WTA rankings, Wimbledon reserves the right to change the order to create “a balanced draw”.

Anderson’s promotion is bad news for French Open runner-up and world number four Dominic Thiem who drops to fifth seed and could play Djokovic, Federer or Nadal in the last eight.

Former runner-up Marin Cilic moved up from a world ranking of 18 to the 13th seeded spot.

Seven-time champion Serena Williams is seeded 11th as per her WTA ranking. Last year the American was bumped up to 25th seed despite being ranked 183rd after returning to the Tour following the birth of her daughter.

Wexford GAA say some clubs ‘let association down’ with social activities 16:37
O’Brien well set to land a 10th Vertem Futurity 16:09
IRFU will charter plane for women’s team to France 16:11
FA won’t punish Jordan Pickford for challenge on van Dijk 14:37
Jordan Larmour ruled out for 16 weeks after shoulder surgery 13:10
Here is your handy guide to sport on television this week