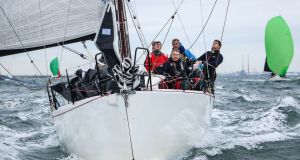 A class victory at the Irish Cruiser Racing Association (ICRA) nationals on Dublin Bay this month and a successful defence of the Dún Laoghaire to Dingle race, also in June, has Paul O’Higgins’s Rockabill VI the runaway leader of the ICRA’s Boat of the Year award at its halfway stage.

After five of 12 events sailed – but with this week’s Sovereign’s Cup at Kinsale still to be counted – the Royal Irish JPK10.80 is on 15 points, seven ahead of the ISORA J125 Jackknife (Andrew Hall). Currently one point behind in third place is ICRA Class One champion Joker II (John Maybury) on six points.

However, the gap is sure to close on Saturday when Sovereign’s Cup points are totalled as Rockabill VI or Jackknife are absent on the south coast, and Maybury is vying for the overall Class One lead at a windy Kinsale venue.

ICRA updated its Boat of the Year scheme this year to better reflect the national cruiser-racer picture. Instead of an annual committee decision the points from a series of 12 regattas will be combined to identify the top performing boat on IRC across the season balanced between the east, south, west and offshore scenes.

For his second participation at the “Figaro”, the famous French multi-stage solo offshore race, Co Meath’s Tom Dolan finished 25th overall when he sailed into Dieppe on the last leg this week. A second Irish entry, Joan Mulloy from Co Mayo, was 38th from 44 starters.

More consistency in the latter stages left the Royal St George Yacht Club man 10th overall and the eighth European (two Canadians were ahead of him in the Open rankings).

The next few weeks will be the busiest of the year for the Irish Laser fleet with three significant events in quick succession. The first is this weekend’s Ulster Championships at East Antrim Boat Club, Larne. Next is Rush Sailing Club’s Leinster Championships on July 6th, with a five-day coaching clinic added. The third event is Dún Laoghaire Regatta on July 11th, the country’s biggest sailing event that has attracted 480 boats so far.

Rio silver medallist Annalise Murphy, sailing with Katie Tingle, continues her campaign for Tokyo Olympic selection at the end of the year in New Zealand with more 49erFX regatta practice at Kiel Week, Germany. The Dublin-Cork duo, placed 29th from 53 races after five races sailed this week , moving up a dozen places from Wednesday.

Howth Yacht Club’s Laura Dillon is among six women profiled by the Royal Ocean Racing Club ahead of their participation in this year’s Rolex Fastnet Race. While crew lists for August’s race are not yet finalised at present just over 10 per cent of those competing in the biennial voyage will be women. This year Dillon joins the four-strong crew of Conor Fogerty’s Figaro Beneteau 3, Raw – one of only three of the new offshore class in the race.

1 Gerry Thornley: Saracens very late to apologise for repeated cheating
2 Felix Jones expects De Allende and Snyman to boost Munster
3 How to get to the Champions Cup final without breaking the bank
4 Pep Guardiola says it’s time to axe the League Cup
5 Does Ireland need to get in-line with UK’s stricter gambling laws?
Real news has value SUBSCRIBE