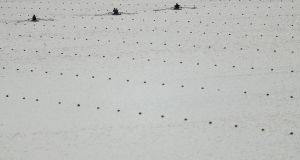 One of the most positive stories in Irish rowing has been the support provided by the Ireland Funds. Without drawing attention to itself, the philanthropic network has provided €500,000 to build up the sport and give opportunities to young Irish people.

On the ground, working with Rowing Ireland, this has seen the development of a regional centre in Limerick, strong links to Castleconnell and the University of Limerick, a talent identification scheme, and a bridge to scholarships in the United States for young rowers.

The key man in all of this has been Rowing Ireland under-23 co-ordinator and Castleconnell coach, James Mangan. He rowed and coached in the US, where he founded Saugatuck Rowing Club, and built up strong relationships in the sport there.

Castleconnell have reasons to celebrate this weekend. Their Sprint Regatta on Saturday has drawn a record entry of 520 crews, while Castleconnell rower James O’Donovan joins John Kearney (Cork), Jack Dorney (Shandon), Matt Gallagher (St Joseph’s) and cox Leah O’Regan (Shandon) in the Ireland coxed four which competes in the European Junior Championships in Essen in Germany.

The Ireland team for the senior Europeans in two weeks sees Monika Dukarska and Aifric Keogh named in the pair, though Keogh is ill at the moment. “We hope she will be back soon and competitive at the European Championships,” said Ireland high-performance director Antonio Maurogiovanni.

The rest of the team is on expected lines: Sanita Puspure, world champion in the single, heads the line-up, with Ronan Byrne and Philip Doyle in the double also hunting a medal. Denise Walsh and Lydia Heaphy form a lightweight women’s double.

The next trial is in June and the numbers of invited athletes is so big that the provisional programme runs from Friday, June 21st, to the following Friday, June 28th.

The heavyweight men’s side has big numbers, but Maurogiovanni makes it clear that invited athletes must perform in ergometer tests in advance of the trial.

The Italian says that the men’s double (Byrne and Doyle) are on the mark, but a men’s four or pair will not be formed just to make up numbers. The aim is not just Olympic qualification.

“The goal this year is not just to qualify the boat. I want to qualify boats that can make the A Finals.”

The women’s heavyweight side looks more likely to feature a four (in addition to Puspure and the pair), but this also depends on those involved proving themselves.

On the domestic scene, youth may make up the bigger part of regatta programmes, but masters events are a growth area. Anna Liffey, the alumni club of Dublin University Ladies Boat Club, had a big weekend. The won on the masters eight and quadruple at Trinity Regatta – and their senior pair took a bronze medal in Ghent.

Soon the river shall have a new bridge. The Anna Liffey, perhaps?