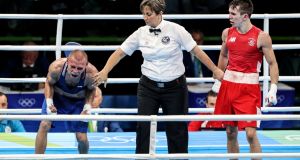 The Russian boxer was at the centre of one of the most controversial boxing decisions ever made at Rio 2016 when he was declared the winner over Conlan, prompting the Irish bantamweight to launch into a vitriolic criticism of the judges and the International federation.

Conlan reacted by raising his middle finger at officials and delivering a profanity laden attack on live television accusing officials in amateur boxing of corruption.

Subsequently a number of judges officiating in Rio were sent home, while Nikitin was unable to fight in his next bout due to the injuries inflicted by the Irishman.

WBO Inter-Continental champion, Conlan (11-0, 6 KOs), has steadily risen through the ranks as a professional since the highly contentious loss.

The highly anticipated fight will take place in The Falls Park not far from where the 27-year-old grew up in Cavendish Street, just a number of streets away off the Falls Road.

“I am delighted that I will be fighting Nikitin in front of 8,000 fans in the Falls Park. This is literally home turf for me and it is absolutely huge. I am West Belfast and Falls Road born and bred so this means everything to me,” said Conlan.

“I said last year that I would love to headline a massive outdoor fight night in the Falls Park and Féile an Phobail, MTK Global and Top Rank Boxing have delivered big time. This is going to be epic.”

Nikitin (3-0) has won all three of his fights since turning professional last year and beat Conlan twice as an amateur. However Conlan rose to become World Champion, the only male Irish boxer to do so alongside lightweights Katie Taylor and Kellie Harrington.

“Conlan will regret pushing for this fight,” said Nikitin. “I beat him twice in the amateurs and will do the same as a pro. It will feel even sweeter to beat him in his hometown. Belfast here I come!”

In claiming the decision over Conlan, the 29-year-old Nikitin won a bronze medal in Rio 2016. He was also a silver medal winner at in the 2013 World Amateur Championships in Almaty.