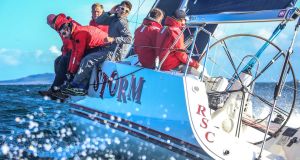 With next week’s Scottish Series lifting the curtain on a six-week period of intense yacht racing on the Irish Sea, results from Loch Fyne will provide the form guide for a packed 45 days of inshore and offshore Irish sailing action.

Although Pat Kelly’s J109 Storm lost out to Scottish RC35 Champion the First 36.7 Animal, (Debbie Aiken) on her home waters of the Clyde at Kip Regatta last weekend, the Howth boat has a chance of revenge when she returns to Tarbert as the Scottish Series defending champion next Friday.

Kelly’s crew lead a 15-boat Irish foray north where Irish campaigns are in with a chance of winning some IRC silverware at Scotland’s biggest sailing event. For example, in a 14-boat class two, Storm is joined by two Dublin sisterships, Chimaera (Andrew Craig) of the Royal Irish YC and Tarbert regulars Something Else (Brian & John Hall) of the National Yacht Club. From Northern Ireland, the Strangford Lough Elan 37 Adelante is also entered as is the RC35 Hijacker (S Cranston & J Buchanan) of Down Cruising Club. All told, it’s a formidable Irish line up in a single class.

One week later, on June 7th, the focus of IRC racing in the Irish Sea moves to the ICRA National Championships at the Royal St George Yacht Club in Dun Laoghaire where a near 100-boat fleet has been assembled. Under new ICRA rating band guidelines, all boats of the same type will race in class but the final class breaks will not be known until later this month.

Again, there has already been some early season form shown when, last weekend, Richard Goodbody in the J109 White Mischief won the class Eastern Championships on Dublin Bay but only by the tightest of margins in a 10-boat fleet.

The scene will be in offshore mode on June 12th when a predicted 40-boat fleet races from Dún Laoghaire to Dingle in Co Kerry. And defending champion Paul O’Higgins in the JPK10.80 Rockabill VI has already signalled his intention by winning the first Isora race of the season into Holyhead a fortnight ago, yet only after the Royal Irish skipper deployed a new code zero sail to good effect in the closing stage of the 60-mile race along the Welsh coast.

In a nod to fixtures co-operation between clubs, the timing of the D2D was arranged so boats participating in the ICRAs can use the offshore race to get south in time for the Sovereign’s Cup at Kinsale on June 26th.

The 2019 season then reaches its climax at Dun Laoghaire in eight weeks time when over 500 boats in 36 different classes are expected on July 11th for the biggest regatta of the year.

This weekend World Sailing sits down to choose a replacement for the Laser dinghy at Paris 2024 which is the main item on the agenda of its mid-term meeting held at Chelsea Football Club in London. The women’s Laser Radial brought Ireland its greatest Olympic sailing success when Annalise Murphy won silver in Rio three years ago but now the dinghy almost looks certain to be scrapped from the Olympic line-up by lighter and more dynamic designs.