Sonia O’Sullivan: Why slowing down is sometimes the best way forward 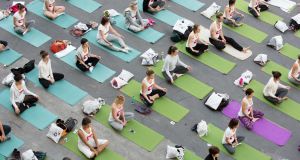 Like most things when an idea enters my head it’s hard to let it go, and I was wondering if I could maybe join the yoga class when got then I got the message:  “See you just after 12, unless maybe you want to come to yoga?” Photograph: Getty Images

We’re all creatures of habit, especially the distance runner, and when I think about daily exercise I still instantly think about moving fast, getting the heart rate up, or at least something a bit more than just going out for a leisurely stroll.

I often wonder does everyone else think the same. That once you make up your mind to do something then there needs to be a fixed target and energy level required, or else it doesn’t really count.

Typically for me it’s a run, a bike ride, a swim or else maybe some fast circuits in the gym – always with the mindset that when you put in a bit of proper effort you can walk away afterwards satisfied and feeling like you’ve done something.

It’s the feeling that comes with burning some energy, releasing some endorphins, and also feeling like you’ve earned your dinner, or at least feel the hunger creeping in.

Then there are the more gentle forms of exercise: walking the dog, Pilates and yoga, and all the varying forms of stretching and waking up the body. I’ve tried all of these over the years at some stage or other but none have ever really stuck as part of my daily routine.

Just like you might be a person who likes activities on land as opposed to water, there may also be a division of those that like the more gentle forms of exercise, which work the body and mind together, as opposed to the sprint out the door, heart thumping, fast-paced activities.

Only sometimes we are reminded that you can’t always be racing around at speed and intensity, because it can wear you down. There comes a time to reconnect with the more gentle forms of activity, to slow down, and still walk away feeling like you’ve done something positive and feel satisfied from that hour of gentler activity.

It can also take something old to learn something new, only for me it turns out not new at all, but one of the oldest forms of human movement and activity.

It’s funny sometimes how you can be reminded of something you once did and liked a little bit but put aside because time and life and being busy got in the way. An hour a day is what I like to aim for, get out, get active get the heart rate up. You think you are fit until you are reminded that there are over 600 named muscles in the human body, yet we only use a small fraction of these daily.

When we’re in a rush, doing what we know, a quick run, a head-down all-out bike ride, or splash about in the sea, the big muscle memory kicks in and we cover some distance, and all the little muscles just come along for the ride.

Whenever I try to do some regular running and add in a few faster efforts, it’s rare not to wake up the next day with some aches and pains, and if I’m not careful lead to a full on injury that could sideline me for a few weeks.

It’s also too easy to try and squeeze things in without the proper warm-up or warm down, when racing along the trails or up and down the hills. I try to vary it mix up the activities on alternate days, knowing by Friday I’m always ready for a rest day, wondering about the best plan of action.

But it took an old friend of mine, who I hadn’t seen in over 20 years, to properly change things up a bit recently. Not just any old friend; this was Carol Kolimago, my old roommate from Villanova University, college days in America, who only recently moved to Melbourne with her family. We were on the Villanova team that won the NCAA cross country in 1990 and again in 1991, when running really was our only form exercise.

We had arranged to meet up for a coffee, then Carol mentioned that she would be coming straight from yoga. It was forecast to be a wash out of heavy rain throughout the day, so that would limit any outdoor activities. I don’t mind normal rain but this was due to be torrential; so if you don’t have to then why would you venture outside?

Like most things when an idea enters my head it’s hard to let it go, and I was wondering if I could maybe join the yoga class when got then I got the message:  “See you just after 12, unless maybe you want to come to yoga?”

This was the perfect invitation, and now I had my Friday activity locked in.

I wouldn’t have the most flexible of bodies and my memory for all the yoga moves is just about limited to “down dog’ and “upward dog”, not too difficult when I am reminded of these moves by Snowy and Winnie, our two Border Collies when they get up every morning. There I am standing over the coffee machine and the dogs are in the middle of the kitchen stretching out getting ready for the morning walk.

I had to choose some suitable leisure wear for the yoga, loose fitting and warm. This was of more concern to me than what lay ahead, and especially considering my last yoga class was quite a while ago.

It was a big class in a local gym, I arrived and Carol had two mats set up close to the front she must’ve worked out that I would need to be close to the action to follow the instructions from the yoga teacher’s platform.

We started off with a stretch in the crouch position, or as we might’ve said way back in primary school ‘down on your hunkers’. It’s one thing getting in the position but holding it as the teacher walks around the room checking on everyone becomes hard work, very quickly.

I had to call in to play my counting to 10 breathing tactic, when I’d done this five times, I had just about had enough, and this was still only the warm up. All the small muscles and tendons were being called in to play, how was I possibly going to survive an hour of this?

By the end of the class we came back to the very first stretch before lying down to relax and absorb the class. It was a lot more manageable towards the end and I definitely walked out feeling like I had done something, made some progress and already planning a return.

Still, I had some work to do, and it didn’t involve a watch, timing the distance and pace: this was slow controlled movements, waking up some of the smaller muscles that can hide away while out on the long run or bike ride. A gentle reminder that when we take time to slow down and think more about what we’re doing we can actually be waking up every sinew in our bodies.