British number one Johanna Konta out of Australian Open 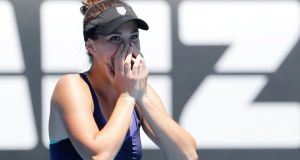 Jo Konta said before her second-round match against the world No123, Bernarda Pera, she was unsure what the American slam debutante looked like, although they were contemporaries on the challenger circuit. After an hour and 40 minutes on Show Court 2 on day four of the 2018 Australian Open, the British player had seen quite enough of Pera, who belied her ranking to deliver the upset of the day, winning 6-4, 7-5.

It would be little consolation to the British loser that Pera’s victory gave substance to the growing and oft-repeated assertion that there is paper-thin difference between the leading players and those chasing them, whatever their rankings.

As Konta headed for the locker room, Pera said courtside: “I was more nervous to serve out the first time, when I lost the game at 5-4. I felt a little less nervous at 6-5. I am so happy that I was able to finish it.”

Konta, seeded ninth, struggled with the windy conditions, especially at the end, when she botched a simple smash, but could have no excuses. She saved 13 of 17 break points, but the American converted both of hers and was a deserved and delighted winner.

At the tournament where she made her defining breakthrough at the highest level, reaching the semi-finals two years ago before losing to the eventual champion, Angelique Kerber, Konta cracked under the beating Melbourne sun.

She was fit and in form, having finished off Pera’s compatriot, Madison Brengle, in the first round by breezing through nine of the concluding games for a convincing two-set start to the fortnight. But she was off-key here from the first ball.

She had to save break point to hold. Thereafter, she discovered that her lowly-ranked opponent had weapons in her game that have had those in the know in the US talking up her chances of a big win at some point. Pera is 23, about the age Konta was when she put her nerves in a box and started to play to her full potential.

Pera raced to 40-15 and wrapped up the set after 39 minutes when Konta thrashed a backhand wildly wide.

For all that insiders rate her, Pera was not even supposed to be in the draw. She squeezed in late as a lucky loser, after the withdrawal of the Russian Margarita Gasparyan, having lost to Viktoriya Golubic, the world No63, in her last qualifying match. Now she was a set up against one of the favourites.

They exchanged breaks at the start of the second, Konta botching a drop-shot in the third game.

She saved again in the fifth game, as her nervous racket remained stubbornly unresponsive to her best intentions. As she sat motionless in the shade of her courtside seat before returning to the fray, her new American coach, Michael Joyce, yelled encouragement from his distant vantage point, probably stretching protocol, but reflecting the anxiety of the situation perfectly.

Konta was two break points down again in the seventh game, saving both, before giving up a third past deuce. A big serve down the T got her out of trouble, but Pera found a whizzbang forehand down the line to force a fourth opportunity, and Konta handed her a fifth – then the break with a backhand that edged a wide. Pera buried a simple drive volley to give Konta hope at 30-all but aced to hold, and Konta was serving to stay in the tournament.

The mistakes multiplied, though. Pera had her destiny in her own hands, serving at 5-4 but hit the net from deep and, at 30-40, shoved a backhand wide. At last, Konta was back on level terms, having saved three match points.

But the fightback faltered disastrously when she totally missed a smash looking into the sun, handing Pera her 15th break chance. Konta saved two of them but slipped on the baseline as Pera’s forehand flew past her, legally.

For the second time, the match was on the American’s racket. She got another three match points with a belting forehand to the deuce corner, drilled a backhand wide – then was hugely relieved to see Konta make a total mess of another smash, and the job was done.