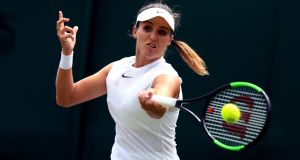 Laura Robson: “I would kind of lean towards renaming it. It’s a tough one because she obviously achieved so much . . .” Photograph: John Walton/PA

Laura Robson has come out in favour of renaming Margaret Court Arena, becoming the first current player at the Australian Open to advocate doing so.

The former British No1 believes Court’s outspoken and hugely controversial views about LGBT issues and same-sex marriage do merit action from Tennis Australia and the Victorian government.

Billie Jean King spoke out strongly against Court on the eve of the tournament but players competing in the year’s first Grand Slam have been reluctant to get involved in the row – until now.

“Yeah, I would kind of lean towards renaming it,” said Robson. “It’s a tough one because she obviously achieved so much but, if someone is being asked to play on that court and they don’t maybe feel comfortable, or people in the crowd feel a little awkward about sitting in there, then people need to have more of a think about it and decide what is best going forward.”

Robson has history on the matter having worn a rainbow hair band during a first-round match on the court six years ago in a show of support for equal rights.

Her lowly ranking now means she is a long way from playing another match in the arena, but Robson was reminded of that moment this week when one of the ball boys from the match sent her a message on Twitter to say how much it had meant to him.

“The message he sent was sweet,” said the 23-year-old. “It seemed like such a minor thing for me to do then, but it obviously made a difference to someone else on that court.”

Meanwhile, Kyle Edmund has said his mother will be on his case about using plenty of sunscreen in the predicted heatwave during his third-round match against Nikoloz Basilashvili on Friday.

“My mum is South African,” he pointed out. “My dad was born in Wales but moved to South Africa. I moved to England when I was three, so I didn’t grow up in the sun. But I have fair skin and I know that, when I’m playing in hot countries, I get burnt very easily. I have to look after my body. It’s no joke; if you don’t look after your skin, people get skin cancer.”

Edmund’s youth and strength got him over the line against Basilashvili in similarly tough conditions in Paris two years ago.

“It was two tight sets. He was a break up, serving for the third,” Edmund remembers. “I broke him twice to win the set, then he tapped out in the fourth. When you win those type of matches, when you outlast people, it gives you confidence.”