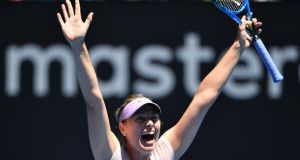 Day by day, the rankings on the women’s tour are being shredded to the point of irrelevance – and when Jo Konta joined Sloane Stephens, Venus Williams, Coco Vandeweghe, Petra Kvitova and Garbiñe Muguruza among a slew of seeded players to lose here over the first four days, one “outsider” stood taller than them all: Maria Sharapova.

The Russian, champion here a decade ago and back in Melbourne two years after failing a drugs test but still feted to the point of idolatry, is playing way above her WTA status of 49. So it was no great shock that she took down the 14th seed Anastasija Sevastova in a grinding two-setter on Thursday.

On Saturday the 30-year-old blonde black sheep of tennis plays the 2016 champion, Angelique Kerber, who demolished Donna Vekic in two sets. If Sharapova were to beat Kerber, her path to the final week would grow tougher but not beyond her skills and determination.

“I did my job against someone who’s troubled me in the past,” she said. “I think I deserve to smile out there after that victory.” Others did not have that luxury.

Konta tried hard to sound upbeat after the 23-year-old American, Bernarda Pera, a lucky loser who has risen nearly 200 ranking places in 12 months to 123, beat her 6-4, 7-5 on Showcourt No2, nearly doubling her career prize money in an hour and 40 minutes. But the setback was more worrying than the ninth seed allowed herself to imagine.

“She played very inspired throughout,” Konta observed correctly of Pera, “and I didn’t do enough at the beginning when I had little windows to put my stamp on the match. I did OK and I stayed quite strong. But I didn’t do enough with my service games or my returns. I’m still taking good stuff from this. I don’t feel, by any means, it’s a massive catastrophe.”

Maybe it is more than a minor dip, though. She has much to ponder on her way to the Federation Cup, then Doha.

Konta struggled with the windy conditions, especially at the end when she botched a second smash.

At the tournament where she broke through two years ago at the highest level, reaching the semi-finals before losing to the eventual champion, Angelique Kerber, Konta cracked this time under the beating Melbourne sun.

She is right, though, in her analysis of the state of the women’s game –because she has first-hand experience of the rapidly shrinking gap between top and mid-range players.

“Players rarely play the reputation any more,” she said. “I don’t think there have been enough players [IN THE PAST]who understand that now it’s anyone’s game on any day. The rankings reflect a player’s consistency and how well they are able to come in week in, week out, and play at that level. But it doesn’t guarantee that level every single day. There are a lot of things at play. Players come out to play inspired, as they should. I think I did the same. I [STILL]do the same.

“There is always a psychology and a kind of feeling to every match that you play, and that kind of differs with the circumstances.”

The circumstances for Konta since her encouraging rise to the top 10 have not always been what she would wish for. But she is more philosophical than most. In a world where a nobody can become a somebody in under two hours – where any one of six players here could finish the tournament as world No1 – that is a healthy world view to hold.

Konta said the extra attention she gets is not a burden, a significant advance from the days when she was stuck on the outer edges of the rankings and struggling with self-belief, even though she knew the talent was there untapped.

“To be honest I felt very comfortable being here,” she said. “In terms of off-court commitments and talking to you lot and all that, I don’t take it too hard. I don’t feel like it necessarily affects me in how I go about my matches and my training.

“I’m definitely looking forward to Fed Cup [in Estonia from 7 to 9 February] . I didn’t play very much in the last six months of last year, so I think I’m where I’m meant to be right now. I feel it is getting better with each match. I’m figuring things out and enjoying doing it.”

On the issue of the day – the draining heat, which hit 39C – she rejected the notion that the roof be closed on the main courts. “That’s quite nice for the people who are under the roof – not so nice with people who are not.”