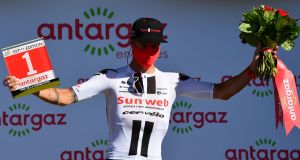 Ireland’s Nicolas Roche celebrates his combativity prize at the end of stage 6 of the Tour de France between Le Teil and Mont Aigoual. Photograph: Stuart Franklin/AFP via Getty Images

Having spent much of the previous night and morning too lamenting the lack of a single breakaway on Wednesday, Nicolas Roche duly attacked just three minutes into stage 6 of the Tour de France and with that went some distance towards influencing the outcome of it.

Forming a group of eight riders which after 80km opened a six and a half minute gap, by the end of the 191km ride from Le Teil to the summit finish at Mont Aigoual Roche was pulled back in by the peloton, although his fellow breakaway rider Alexey Lutsenko of the Astana Pro Team did hold on, a first Tour stage win for the Kazak rider.

Roche, who finished in 56th position, seven minutes and seven seconds back, didn’t leave the stage finish empty handed, as the Irishman also made the presentation podium as the most combative rider of the day – the “antargaz” – which is decided by a jury of four cycling experts shortly before the stage finish.

Indeed Roche hardly let up once part of that eight-man breakaway, first over two of the closing climbs at Cap de Coste, and the Col de Coste, before losing ground with just under 18km to go, and 4.6km short of the penultimate climb at Col de la Lusette, where the breakaway finally began to splinter.

That combative awards also allowed the Team Subweb rider to briefly share the podium with fellow Irish rider Sam Bennett, who comfortably defended the green points jersey won the previous day, the Deceuninck-QuickStep rider gaining another three points on his rival Peter Sagan after finishing ahead of him at the intermediate sprint at St-Hippolyte-du-Fort at 125.5km.

Bennett now has 129 points to Sagan’s 117, although he admitted afterwards that defending any jersey is no easy task, and that the Slovak rider was certain to have a further say as the race progressed.

Roche went so far, but just not near enough, admitting it wasn’t the finish to the breakaway he had once envisaged. “When I saw the quality of the guys in the breakaway, I thought to myself, ‘these are good lads, we’re going to get along’,” he said of that eight-man breakaway, which did see Jesús Herrada (Cofidis) hang on for second, before Greg Van Avermaet (CCC) out-kicked Neilson Powless (EF Pro Cycling) for third.

Roche had flagged this attack well in advance, perhaps influenced by the fact the last time this race entered this part of Massif Central, mostly unfamiliar Tour country, and ascended Mont Aigoual, was 1987, when his father Stephen was en route to winning the Tour, before completing the Triple Crown.

“Today is a free day,” he declared. “It’s still a real 50/50 with the breakaway, because you know before the last big part of the race, the first part is tailwind, not so difficult, so quite easy to control for some of the bigger teams. So it’s a real gamble today, but I think I’ll give it a try anyway.”

It certainly made for more interesting viewing that the previous day, even if none of the General Classification contenders went to war, until the last 100m at least, when Bennett’s team-mate Julian Alaphilippe stole back one of the 20 seconds he was penalised the day before for an illegal feed inside the final 20km. Adam Yates of Mitchelton-Scott, who on Tuesday became the ninth Briton to take yellow in the Tour, stayed relaxed in the peloton and finished 10th, just over three minutes down, still three seconds ahead of Jumbo-Visma’s Primoz Roglic at the front of the race.

Edvald Boasson Hagen took the intermediate sprint as part of the breakaway, but Bennett made sure he finished ahead of Sagan, earning six points in 10th, while Sagan got three points in 13th.

“It’s actually hard to work to keep this jersey, to watch who gets in the break, who gets the intermediate, and then do the final sprint,” said Bennett afterwards. “It was kind of funny at times, people thought I was Peter, they’re so used to seeing him in green, so people on the road side were shouting ‘Sagan’ at me, so maybe they’re not used to it yet. But it was a lovely experience, also hearing my name being shouted a lot, and also to get all the lovely messages from home last night, just showed the support I have at home, which is really nice.

“I’m taking it day by day, and will go for it again tomorrow. When I found myself getting close, I tried to get it for a day, and now that we have it, we’ll try to keep it. But it was something I always had in the back of my mind. At first it was about getting the stage win, but maybe I’ll have to sacrifice that to keep that.”

Stage 7, the 168km from Millau to Lavaur, is certainly bumpy but should fall into the laps of the sprinters, and perhaps give Bennett another shot of that elusive stage win.