Croke Park ‘could be safely filled’ to 30% capacity 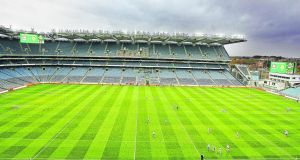 Stadiums such as Croke Park could be safely reopened and filled to up to 30 per cent of normal capacity while still adhering to social distancing guidelines, if or when Government limits are lifted on the numbers able to attend outdoor sporting gatherings.

While allowable attendance numbers were recently reduced from 200 down to zero, with all sporting events currently taking place “behind closed doors” up until September 13th at the earliest, UK-based analytics company SAS is already providing several clubs and sporting leagues in Europe and America with more exact stadium numbers and capacities that keep spectators safe and socially distanced while also maintaining the financial viability of such attendances.

“It depends firstly on the [social] distance that is being asked to be maintained between the spectators that are being allowed into the stadium,” says Reece Clifford, sports industry adviser of SAS UK and Ireland.

“So if you are looking at seating capacity while maintaining, say, 1.5m – and, again depending on the local restrictions, basing seating on one household, then another household – that’s where you start to raise the utilisation of those numbers of seats, and where you can get up to 30 per cent.

“When we’re asked to show stadiums what our tool can do, that’s the first consideration, but we can also take into the account the width of the aisles [and issues such as], can we have people seating next to the aisles?

“In the UK specifically there have been documents sent out to all the clubs asking them to come up with a Covid capacity, and that’s asking them to take a lot more into account that just the distance between each other, when people sit down, but also the concourses, how many entry and exits, what the public transport links are like, and when we do speak to the clubs, and the leagues, that’s what interests them in what we’re able to do, and how we’re able to take all those different parameters into account, to get the true percentage utilisation for the club.

“That’s what we’re trying to give stadiums and clubs the ability to do ... whether it’s Croke Park or other stadiums across Ireland: give them the proof and the confidence that they’ve gone through the process to give them a true Covid capacity, based on the data that the analytics is run. It’s also a tool that can be used by the authorities, and they can make a plan around that. And we’ve a full variety of stadiums and leagues using the technology.”

Using a seat optimisation solution, SAS has already estimated that Liverpool could allow more than 16,000 fans into Anfield, Manchester United more than 22,000 and Chelsea more than 12,000, all while keeping them socially distanced and safe.

“It’s also about being able to plan ahead and allowing clubs to adapt to the changes in social-distancing rules, if say it drops to a metre, or even less. A new optimise run on the stadium can take all that into account, and give them an answer in less than two minutes. It’s that agile and adaptable. We’re not just a niche supplier in sport, but the largest private analytics company in the world. And outside of sport, too, hosting concerts, theatre – it’s very broad.

“That’s the big thing, being able to adjust to the changing measures, and realistically we have no idea how this will go on for. Our main driving goal is getting back to the closest normality as possible, inside the stadium, while maintain the safety needs of all those inside the stadium, abiding by all the rules, and making it as normal a day as it as possible.

“We’re being as flexible as possible, to use the software for a year, or six months, as required, taking into account whatever parameters are there at the moment, so there is a wide variety of ways to achieve what they want to achieve.”

The seat optimisation solution also accounts for complexities such as having two members of the same household going to the game. Where tickets could be sold in groups of one, two, three or four, SAS worked out that most stadiums could safely fill 30 per cent of their stadium capacity. Other options include staggered arrival times and one-way systems that can be analysed and perfected to make it safe for supporters.

Uefa is already set to trial the return of spectators to European fixtures at the Super Cup in Budapest next month. The European governing body has announced the Puskas Arena could be up to 30 per cent full for the showpiece clash between Bayern Munich and Sevilla on September 24th.

All European fixtures have been played behind closed doors, including the recently concluded Champions League and Europa League finals, since football resumed following the coronavirus stoppage.