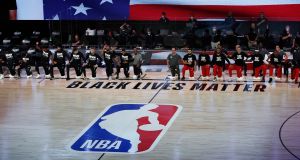 The Brooklyn Nets and the Toronto Raptors take a knee during the national anthem before their NBA basketball playoff match. Photograph: EPA

Defending champions the Toronto Raptors charged into the Eastern Conference semi-finals with a crushing 150-122 defeat of the Brooklyn Nets on Sunday, completing a 4-0 series sweep.

Toronto lost star Kyle Lowry to an ankle injury in the first quarter, but reserves Norman Powell and Serge Ibaka stepped up to help complete the rout.

Powell finished with 29 points, Ibaka had 27 and 15 rebounds, while Pascal Siakam had 20 points and 10 assists. Caris LeVert scored 35 points for the Nets.

The Raptors have been in crushing form since going into the NBA’s bubble, going 11-1 in that time. They will now play the Boston Celtics, who also completed a 4-0 sweep by beating the Philadelphia 76ers 110-106.

Kemba Walker led the way with 32 points, while Jayson Tatum added 28 points and 15 rebounds as the the Celtics pulled away in the fourth quarter.

Joel Embiid had 30 points and 10 rebounds for the 76ers while Tobias Harris had 20 points.

The Dallas Mavericks levelled their first round play-off series with the Los Angeles Clippers 2-2 with a thrilling overtime victory, winning 135-133 thanks to a Luka Doncic three-pointer on the final buzzer.

The Clippers had taken the lead with only nine seconds left thanks to a Marcus Morris three pointer, but Doncic would ruin their dreams of a 3-1 series lead.

The Utah Jazz took a 3-1 lead in their series against the Denver Nuggets with a thrilling 129-127 win in a match in which two players dominated.

Donovan Mitchell scored 51 points for Utah, while Jamal Murray had 50 for the Nuggets.

Mitchell took control to score 18 of his points in the gripping last quarter, and is now averaging 39.5 points per game in the series. Mike Conley contributed 26 points for Utah. Murray hit a three-pointer moments from the buzzer to narrow the deficit.