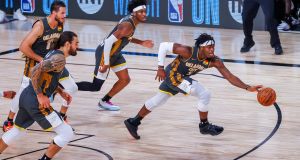 The Oklahoma City Thunder have forced a deciding seventh game of their playoff series with the Houston Rockets after a late surge helped them to a 104-100 win.

Houston led the best-of-seven series 3-2 and found themselves 98-92 up with just over four minutes to play as James Harden rounded off his 32-point haul for the night.

However Chris Paul shot two consecutive three-pointers to tie the game, and added two free throws in the last 15 seconds as the Thunder stole the win.

The winner of Wednesday’s deciding game will go on to face the Los Angeles Lakers in the semi-finals.

In the Eastern Conference, the semi-finals have already begun with the Miami Heat upsetting top seed Milwaukee Bucks 115-104.

Jimmy Butler starred for the Heat, scoring 40 points and 14 in the fourth quarter.

The Bucks raced to a 40-29 lead after the first quarter, but slumped in the second and third as they were outscored 63-46.

Giannis Antetokounmpo, a frequent scorer for the Bucks, only managed 18 points and was four from 12 on free throws.