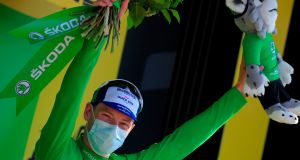 Ireland’s Sam Bennett celebrates his green jersey on the podium at the end of atage 5 of the Tour de France. Photograph: Christophe Petit Tesson/AFP via Getty Images

Taking his delight and disappointment and pressing them somewhere against the middle, Sam Bennett found nothing but pride in becoming only the third Irish rider in Tour de France history to don the green jersey, duly decided after another hectic sprint to the stage 5 finish at Privas in the Auvergne-Rhône-Alpes.

His hope and intention now is to wear it all the way to Paris, still another 18 days and 16 stages away, and in this sort of form Bennett will be hard pressed to surrender it. This is the same jersey fellow Carrick-on-Suir rider Seán Kelly won four times outright, the last in 1989, and Stephen Roche wore for two stages in 1987, and it seems to suit and fit Bennett perfectly well too.

For the third time in those opening five stages, the outright stage win just about eluded him too, Bennett coming in third behind Belgian rider Wout van Aert, who timed the testing run-in to perfection to seal another stage win for Team Jumbo-Visma, ahead of Cees Bol from Team Sunweb.

In truth never ideally positioned to win this one, Bennett’s third place was crucially ahead of Peter Sagan in fourth, the Bora-hansgrohe rider who had started the day in the green jersey. Bennett had already taken over the jersey in the virtual sense out on the road, winning the intermediate sprint at L’Épine, after 48 km, but needed to finish ahead of Sagan at the finish to be sure of keeping it.

“Third Irishman to wear the green jersey, after 31 years, that’s very special for me, and I’m focused on keeping it,” Bennett said soon afterwards, his post-race interview outside the Deceuninck-Quick Step bus interrupted with the news his team-mate Julian Alaphilippe had surrendered the yellow jersey to Adam Yates, after Alaphilippe was hit with a time penalty, the commissaires taking 20 seconds off for an illegal feed inside the final 20 kilometres.

“It was a hectic sprint, the last 50km was hard, and even on the run in, with 3km to go, I thought I don’t even have the legs anymore to sprint,” said Bennett, who then admitted the news of Alaphilippe’s time penalty took a little of the shine off his celebrations in green. “It’s a bit disappointing. We only heard about it obviously after the finish. It’s a bit of the highs and lows today. We thought we’d have yellow and green but unfortunately we don’t have it now.

“I’m honoured to wear [green] at least once and I’m really happy that happened today. It’s hard to go for stages and the green jersey – I was so focused on the green I almost forgot to really, really try to win. So I’ve never had such mixed feelings in my career. I’m delighted to be in green but also disappointed that I didn’t win. But I think I got so caught up in trying to get green, I almost forgot to go for the win, or almost as if I forgot my killer instincts.

“It’s still a very special moment in my career, to hold it for at least a day, to follow in their footsteps [Kelly and Roche] is something really quiet amazing, and very proud to it, with the national championship jersey as well. So I’ll enjoy this moment.”

For the 29-year-old Bennett, it also offers some redemption, given it came four days after first hopes of an Irish stage win and a first yellow jersey in 33 years fell just short in stage 1 on Saturday afternoon, when he finished a desperately close fourth on the final bunch sprint down the fast Promenade des Anglais. On Monday, Caleb Ewan from Australia nailed his sprint to perfection to win stage 3, just edging past Bennett in the final metres to leave him in the runner-up spot.

The green jersey rewards the Tour’s most consistent finisher, usually a sprinter, based on points gained from intermediate sprints and end of stage placing. It’s perhaps redemptive in other ways too, given Bennett might well have started a couple more Tours since 2016, only his previous team Bora-hansgrohe were always going to make Sagan their lead sprinter (or else their German rider Pascal Ackermann), meaning Bennett had to be content with either the Giro d’Italia or the Vuelta a España, which to a large extent he was, winning three Giro stages in 2018, and two in the Vuelta last year.

Bennett started stage 5 level on points with Sagan, both riders on 83 points each. Sagan, however, retained the green jersey for the stage and the 127th time in his career (including a record seven trips to the final podium as overall points classification winner in his career) given he remained ahead of Bennett in the GC, the Slovak rider sitting in 101st, while Bennett started the day in 156th.

That changed on the stage 5 intermediate sprint at L’Épine, after 48 km, where Bennett took the win and the virtual green by taking the 20 points, with Sagan taking fourth. He’s now on 123 points, nine ahead of Sagan’s 114.

Nicolas Roche suffered the most of the Irish trio on the day, finishing 169th in the group that came in 7:07 in arrears, and drops 20 places to 44th, 7:45 behind the yellow jersey, while Dan Martin also lost some more time when he crossed the line in 137th, 4:50 back, losing ground on the fourth category Col de Serre Colon after 130km. He drops six places, now 80th overall, 22:55 behind. Bennett gained six places, sitting in 150th place, 50:52 in arrears, but dressed proudly in green going into Stage 6.