James Harden and Russell Westbrook come back to haunt Oklahoma 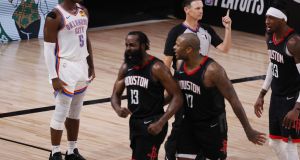 James Harden and Russell Westbrook came back to haunt their old side the Oklahoma City Thunder as the Houston Rockets snuck into the NBA Western Conference semi-finals.

Tied at 3-3 in the best-of-seven series, the sides matched up in a decider on Wednesday night with a match-up against the Los Angeles Lakers at stake.

Westbrook scored 20 points and Harden 17, with the latter blocking a Luguentz Dort three-point attempt with 4.8 seconds left to keep the Rockets in front.

Robert Covington made a free throw with 1.4 seconds left to put his side up 104-102, Danilo Gallinari missed a free throw attempt and a PJ Tucker steal secured the game and series.

Meanwhile, the Miami Heat have stolen a march on the Milwaukee Bucks with a 116-114 win putting the Florida side up 2-0 in their Eastern Conference semifinals series.

The Bucks came into the play-offs with the best regular season record and Khris Middleton drew the game level with 4.3 seconds left by hitting three free throws.

But a shooting foul from Giannis Antetokounmpo as time expired saw Jimmy Butler head to the line and sink two throws for the win.