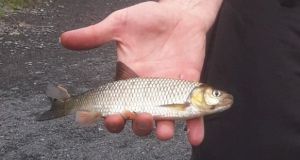 Six young potential poets have been selected as winners of the “Let’s Fish” national poetry competition which took place throughout the summer to help fifth- and sixth-class primary students to research the Something Fishy online resource as a fun initiative to expand their literacy skills during coronavirus restrictions.

Now in its 15th year, Something Fishy is a highly successful project organised by Inland Fisheries Ireland in conjunction with Blackrock Education Centre which allows students to learn about fish and the environment in a local context.

Entries were received from across Ireland and students were invited to write a five-line poem on the topic “let’s fish”. The uptake was very positive and the poems revealed just how much fish and fishing means to the younger generation.

Something Fishy is an educational programme aimed at primary school pupils aged 10-13 years, which informs on fish, water, angling and the environment. It includes lesson plans and activity sheets based on the theme of the “life cycle of salmon - Bradán”.

Web-based resources and new lesson plans are available at somethingfishy.ie/.

Suzanne Campion, head of business development at IFI, said: “We would like to congratulate all of the participants involved and we wish them well as they return to school.”

*Projects designed to protect wildlife in many of Wales’s rivers have been given the green light, thanks to a Welsh government cash injection of more than £1.1 million (€1.2 million).

Welsh salmon and sea trout stocks are in a perilous condition with their numbers at an all-time low. A plan has been set up to restore the populations and the funding will help turn that plan into action.

Natural Resources Wales (NRW) will work with Afonydd Cymru and six river trusts on a range of projects including restoring stream habitats, removing barriers to migration and improving water quality.

Ruth Jenkins, Head of NRW management policy, said: “Salmon are a treasured part of Wales’s wildlife, and healthy salmon populations are important both culturally and economically. We’re determined to ensure that Wales has a sustainable salmon and sea trout population for years to come.”

If you would like to participate, details and registration forms are available at wicklowrivers.ie/aquatic-biology-training-programme/

This week’s course will be held at Tinahely. On Friday an online Zoom session will consist of questions and answers from 6-9pm, followed on Saturday with a field course at Tinahely/Aughrim from 1/2pm to 5pm.

Additional courses are planned for counties Longford, Roscommon and Kildare in the very near future. For further information, email: ken.whelan@hotmail.com.

*Fishing was of a mixed nature on Corrib with some anglers having great success while others reported poor angling. The word “patchy” confirmed a drop in temperature with northeasterly winds coupled with rising lake levels.

In the Cornamona area, Jason Riordan from Waterford and Dave Burke from Cork had 10 over three days, best 3lb. John Somerville jnr and Jackie Coyne managed four on wet Mayfly and Andrew Boyd landed the best fish of 3.75lb.

Galway angler Harold O Toole had four on dries in the Ballycurran and Rabbit Island area while friends Gene Haran and Neil Gelston had four over two days on wets and dries, best 2.75lb.

In the Greenfields area, Sean Ronayne and son John from Waterford had five on dries and Christy Crotty and Sean Ronayne had one each on dry sedges.

*On Sheelin, 27 trout were recorded with the majority of catches at noon and into the late afternoon. Weight of the week was a beautiful 4lb fish caught on a Black Pennell by Navan angler, William Smyth.