The seven foot one, 25 stone former NBA star is universally popular and TV knows it 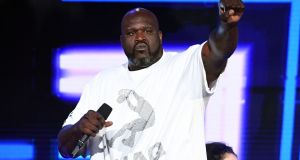 The gaggle of kids shooting baskets on a Gainesville street start to shriek and holler when they see Shaquille O’Neal climbing out of a police cruiser, whipping off his sweater. During the pick-up game that ensues, he runs through his repertoire, one minute rejecting their shots, the next manhandling children half his size under the hoop, all the while providing a hilarious running commentary. At the finish, he conducts a free-throw contest in which every successful participant earns $100 and, by video’s end, it’s obvious yet again that perhaps no other superannuated athlete knocks quite as much fun out of life as O’Neal.

Nearly a decade after his NBA career ended, it’s possible to disappear down a Shaq wormhole on YouTube and never watch a single clip of him ball in hand on the way to winning four championships. There’s too much else to savour. Here he is joyously wigging out to music in his kitchen with his sons during lockdown, there he goes hurling his immense seven foot one, 25 stone frame around a mosh pit at the Tomorrowland electronic dance festival. No sooner has the heartwarming video where he buys 10 pairs of size 19 shoes for the son of a struggling single mother ended than another cues up with dashcam footage of him coming to the aid of a stricken driver on a Florida highway.

In a league where players’ jerseys are now emblazoned with slogans protesting police brutality towards African-Americans, the most beloved pundit in the studio is also an auxiliary deputy sheriff in Broward County and somebody who has occasionally sounded like a mouthpiece for the NRA. In the current political climate, that might be problematic except this is Shaq. And that makes all the difference. His charisma apparently trumps everything.

Even if the joke is he’ll put his name to anything, companies remain desperate to associate with him

Even if the joke is he’ll put his name to anything, companies remain desperate to associate with him in the hope his popularity, which far transcends the game he once bestrode, might be contagious. In retirement, his life seems to offer proof that an effervescent smile, a self-deprecating sense of humour, and a reputation for helping the less fortunate goes a long way in the marketplace.

When Papa John’s pizza chain was seriously damaged by racism allegations against its founder, the new ceo invited Shaq onto the board and made him brand ambassador. Fans tuning in to see if Lebron or Kawhi or Giannis prevail in this most truncated basketball season are now treated to relentless commercials for the ground-breaking Shaq-a-roni pizza. Oversized. Like everything about the man who inspired it. Including his spending.

O’Neal spent part of his hardscrabble childhood in the notoriously tough town of Newark, New Jersey and never forgot his mother’s struggle to put food on the table

When he signed his first ever endorsement deal, he famously dropped $1 million in a matter of hours buying, among other things, Mercedes for himself, his mother (who had him at 17) and his stepfather. At a Rolls-Royce dealership another time, he saw Mike Tyson buying two Bentleys and outdid him by impulsively splurging on three. Traded from Miami to Phoenix near the end of his playing career, he arrived in Arizona to a bare apartment. So, he drove to Walmart at 3am and dropped $70,000 in a shopping spree, an amount so ridiculous that American Express initially declined the card.

O’Neal revels in telling tales about his profligacy, and his infamous decision to reject an invitation to partner with a growing company called Starbucks, because, behind the Falstaffian persona, there’s actually a canny financial operator who bought into Google early. Having read once about the great Kareem Abdul Jabbar losing much of his career earnings, he resolved to be the exact opposite and pieced together a sprawling portfolio that, at one point, included 155 Five Guys franchises, 40 24-hour gyms and 150 car washes.

A life hallmarked by excess but incredible largesse too. O’Neal spent part of his hardscrabble childhood in the notoriously tough town of Newark, New Jersey and never forgot his mother’s struggle to put food on the table. Aside from private philanthropy, his casual generosity is legendary, whether leaving extravagant tips ($4,000 is his record) in restaurants or purchasing laptops for awestruck strangers. He bought a wheelchair-accessible house for a 12-year-old boy paralysed in a shooting and has paid funeral expenses for umpteen families whose plights he heard or read about.

“I don’t believe in pressure,” said Shaq in his pomp. “Pressure is not knowing where your next meal is coming from.”

Hugo Keenan could start in changed Ireland team against Italy 21:04
Guardiola takes blame for City’s European failings 21:12
Kelly and Lynch ready for Thurles showdown as if it’s their last 20:50
Wijnaldum attacks ‘stupid’ Pickford tackle on van Dijk 20:10
Golf clubs waiting to hear if they can stay open under Level 5 18:55
Here is your handy guide to sport on television this week