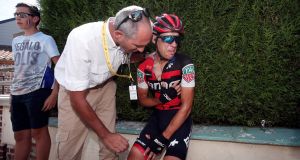 Australia’s Richie Porte has been ruled out of the Tour de France after a crash during stage nine. Photograph: Benoit Tessier/Reuters

Australian Richie Porte was forced to abandon the Tour de France just seven kilometres into Sunday’s stage nine after falling in a crash.

Porte, seen as one of the men most likely to challenge Chris Froome for overall victory, was caught in an incident involving several riders and stayed down on the ground holding his collarbone.

The general classification contenders knew Sunday’s 156.5km stage from Arras to Roubaix was one full of dangers given the 22km of cobbles involved, but Porte’s crash happened more than 35km before the first sector.

Porte won the Tour de Suisse in the build-up to the Tour to suggest he was in perfect form but the 33-year-old, a renowned one-week stage racer, has struggled to hold it all together over three weeks in a Grand Tour.

The former Team Sky rider crashed out of last year’s Tour on stage nine as well, having seen previous tilts at the 2015 Giro d’Italia and the 2016 Tour ruined by mechanical issues and illnesses.

Gonzaga shock Blackrock for historic Leinster Senior Cup win 18:20
Whitehall VEC pitches vandalised by ‘teenagers on quads’ 18:18
Clare ease into action with 16-point thrashing of Carlow 18:03
Kilkenny give an early glimpse of their power to see off Dublin 17:53
Five-star Mark Wood sets England towards Wanderers win 17:45
Here is your handy guide to sport on television this week