Billy Twomey and Irish riders on form in Sweden 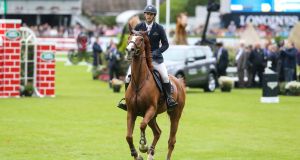 Billy Twomey is in form in Sweden. Photograph: Gary Carr/Inpho

Irish riders have proven themselves, and their horses, on form ahead of Sunday’s Longines FEI Nations’ Cup competition in Falsterbo, Sweden.

Cork native Billy Twomey won the opening international class at the five-star show on Thursday, a 1.45m speed competition, with Joe Flynn’s Irish Sport Horse stallion Ardcolum Duke and, clear in a time of 70.15, won a similar event on Friday morning with the 14-year-old son of Gypsy Duke.

Co Derry-born Daniel Coyle, who is based in Canada but is currently competing in Europe, took the runner-up spot with Ariel Grange’s Farona (70.24) in Friday’s class which was a qualifier for Saturday’s Falsterbo Derby. Wexford native Bertram Allen finished fourth on Christy Jnr (73.27).

There were two Irish combinations in the 12-strong second round. Co Louth-born Mark McAuley was the first of the pair to jump and he looked on course for a fast clear with Jasco v Bisshop but had the final fence down to eventually finish fifth (54.40).

Ahead of a trio of Swedish riders, Twomey bagged the €66,000 first prize when home clear in 55.80 with Kimba Flamenco, a nine-year-old by the rider’s former top ride Je t’Aime Flamenco out of a Heartbreaker mare.

In a time of 72.94 McAuley and Eva Lundin’s Jasco v Bisshop won Thursday’s 1.50m speed class where Co Limerick-born Paul O’Shea, who is usually based in the United States, finish second on Skara Glens Presence (74.31).

Having yet to drop a fence at the championships, Foley is in the Gold medal position heading into Sunday’s individual final. While there was no medal for the Young Riders team, Lucinda Roche is lying 12th in the individual standings with WCE Falco on a penalty score of 12.24 with the lead being held by Britain’s Harry Charles on 6.72.

In the eventing championships, Ireland lies eighth in both the Young Riders and Junior divisions ahead of Saturday’s cross-country phase.