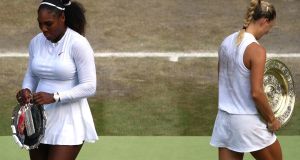 Angelique Kerber became the first German to win Wimbledon since Steffi Graff in 1996 with an impressive straight sets 6-3 6-3 win over Serena Williams on Centre Court on Saturday.

The win hands Kerber her third Grand Slam after Australian and US Open wins in 2016 and denies the 23-times Grand Slam winner Williams a place alongside Margaret Court as the all time most successful female player. Court won 24 Majors in her career.

“I am sure you will have your next Grand Slam title very soon,” said Kerber to Williams afterwards. “I knew I had to play my best tennis. It was my second chance to be playing here. I am the next one after Steffi won.”

Indeed it was Kerber who fell to Williams in 2016, the only other time the German had been to a Wimbledon final. But far from a hint of revenge, Kerber effusively praised her beaten opponent as a great champion.

“First I have to say Serena, you’re a great person and a champion. Coming back, you’re such an inspiration for everyone. So congrats for coming back.”

Williams suggested it was just one match too many, or, one match too early in her comeback. And that’s the way it looked as she struggled for consistency against a robustly precise Kerber.

“I was really happy to get this far,” said Williams. “There is obviously disappointment but I am literally just getting started. For all the moms out there I tried . . . ”

It was the 10th-ranked left hander Kerber who shot out of the blocks fastest, breaking Williams in her first service game and holding serve for 2-0.

Determined to keep the points long and test Williams’s conditioning, Kerber stayed resolutely back court. But the seven-times Wimbledon champion instantly responded, breaking the German to love in the fourth game for 2-2 before Kerber again took the lead, capitalising on two double faults from Williams in the seventh game to lead 4-3.

Taking the Williams serve twice in the opening seven games was unforeseen. But Kerber with her world-class defensive game was not being bullied as so many players have been by the American.

A long backhand from Williams at 5-3 down handed Kerber her first set point. Williams saved but a backhand into the net after 31 minutes and the 36-year-old was 6-3 and a set down and chasing the match.

With Meghan Markle in the Royal Box and golfer Tiger Woods and F1 driver Lewis Hamilton in the players’ seats, Williams had her support team in tow.

But as Kerber began to mix her game with drop shots and lobs, Williams’s noise levels went up. A few impetuous shots early in the second set from the American that went out took some pressure off, but Kerber was solidly matching her opponent.

As she continued to hang tough, the match went with serve in the second set until Kerber worked two break points. Again her fetching and ability to punch the ball back with power and depth had Williams searching for her best game, which just wasn’t there.

Moments of brilliance and moments of the rust showing from her long time out of the game due to pregnancy and giving birth to her daughter last September had caught up.

Kerber broke the famed serve again for 4-2, an approaching Williams passed down the line with a driving forehand from the 30-year-old.

While there was some tightness in the final service game of Kerber, Williams was again giving up easy points, a wildly inaccurate put-away volley that should have had the scores at 15-15 instead giving Kerber a 30-0 lead.

Finally an unreturnable serve sealed the match, Kerber making the traditional journey through the fans to her tearful family and friends in the players’ box.