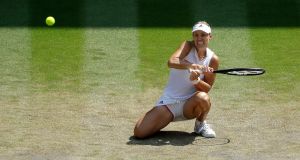 Angelique Kerber withstood a barrage of winners from Jelena Ostapenko to defeat the Latvian 6-3, 6-3 on Thursday and claim a place in the Wimbledon final for the second time in three years.

Kerber made just seven unforced errors and despite a late wobble when Ostapenko came at her again, the German was a convincing winner. She will meet either the seven-times champion Serena Williams or another German, Julia Görges, in the final on Saturday.

“It’s such a great feeling to be back in the final, I am really excited,” said Kerber, the 11th seed. “It was a really tough match, Jelena is always playing great tennis, always hitting really hard, I was just trying to move good and take my chances.”

Ostapenko, who won her first grand slam title at the French Open last year, began the match in familiar fashion, going for broke, cracking the ball so hard that at the times the crowd on Centre Court gasped in amazement. After four games, all of the 13 points the Latvian had won had been winners, forcing Kerber back at every turn.

But Kerber is made of strong stuff and no one is more resilient, no one a better retriever. Having missed a break point chance in the opening game, she earned the breakthrough in the seventh game, when more outstanding athleticism forced Ostapenko to hit one more shot, and eventually the 12th seed missed a backhand.

Kerber held a tight service game to go ahead 5-3 and took the set when Ostapenko served a double-fault, before racing ahead 3-0 in the second set as the errors flowed from the Latvian. Kerber extended her lead to 5-1 but Ostapenko saved a match point with a monstrous backhand and then broke back moments later.

At that stage Kerber looked nervous. Ostapenko held for 5-3 and had a break-point chance in the next game, only to hit her return into the net. Kerber finally got over the line when Ostapenko’s forehand drifted wide, sending her into a fourth grand slam final, but her first since 2016 having struggled to cope with the pressure last year.

Kerber said “2017 is over and I am really happy about that”, adding: “I am really happy and proud to be back in a grand slam final. These are the matches I was working for as young kid and it’s great to be in another final here at Wimbledon.” – Guardian service