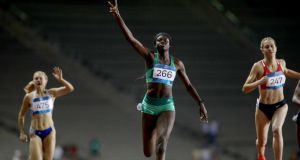 Ireland’s Rhasidat Adeleke celebrates as she crosses the line to win the 200m Final at the European Youth Olympic Festival in Baku, Azerbaijan. Photograph: Bryan Keane/Inpho

Finishing off a properly rare sprint double for Irish athletics, Rhasidat Adeleke has won the 200 metres at the European Youth Olympics in Baku, Azerbaijan.

Adding to her 100m gold won on Tuesday evening, it’s the seventh underage medal for Irish athletics within the last fortnight, and also the sixth championship medal in the short career of the 16-year-old Adeleke.

Just like her commanding and undaunted run in the 100m, Adeleke took immediate control, leading from gun to tape to take the win in 23.92 seconds, raising her right arm in triumph as she crossed the line, well ahead of Mira Koszegi from Hungary, who although running the faster time in qualifying, had to settle for silver in 24.15 seconds.

Still a summer out from her Leaving Cert year at Presentation Terenure, in south Dublin, and not 17 until the end of next month, it also adds to the gold medal she won over 200m at the European Under-18 championships last July in Gyor, Hungry.

Two gold medals, Rhasidat? How does that feel 💪💪💪

She won the Girl’s 200m comfortably, adding it to the 100m gold earlier this week🙌🙌@irishathletics 🇮🇪🇮🇪 👑 pic.twitter.com/7xm3w7yUiL

“It was only a late decision to do both events because I was only meant to do one event, so to come away with two gold medals is so unexpected, and I’m just so happy,” said Adeleke.

“I just tried to have a really good bend, be really fast, and just hold it for the last 100m, and I felt like I was clear, and delighted with that. And the Irish were amazing, when they call your name at the start, it just makes you want to do really well.”

This now brings to six the number of championship sprint medals Adeleke has won over the past three summers: last July, Adeleke also part of the 4x100m relay team that won the silver medal at the World Under-20 championships in Tampere, Finland – a first ever medal for Ireland in that event.

Two years ago at these same under-18 European Youth Olympics, also in Hungary, Adeleke won silver in the 200m, aged only 14, very young even by youth standards. After that she helped the 4x100m team win bronze, along with Patience Jumbo-Gula, Miriam Daly and Niamh Foley.

Her double gold also comes on the back of the silver medal won by Kate O’Connor in the heptathlon in last week’s European Under-20 Championships in Boras, Sweden, a first ever in that event, where Sarah Healy also won 1,500m silver, and Darragh McElhinney 5,000m bronze. Add to that the bronze for Nadia Power over 800m and a silver for Eilish Flanagan in the 3,000m steeplechase at the European Under-23 Championships earlier this month.

Born in Dublin in 2002 to Nigerian parents Ade and Prince Adeleke, she first made her mark when winning a junior sprint double at the Irish Schools championships for Presentation College in 2017. She is also a member of Tallaght Athletic Club, where she is coached by Athletics Ireland’s national sprints co-ordinator Daniel Kilgallon.

The European Youth Olympic Festival is a European event for athletes under-18 that runs every two years.

1 Gerry Thornley: Home and away Six Nations could be its ruination
2 Aviva 10-year ticket holders seek clarity over payment
3 Eddie Dunbar stays in saddle as he eyes return to grand stage
4 Coming fourth in the Olympics didn’t change this fearless quartet, time did
5 Rory McIlroy believes Ryder Cup will be postponed
Real news has value SUBSCRIBE