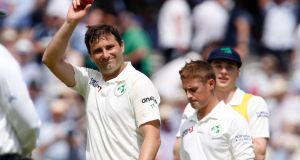 England v Ireland sporting occasions are usually filled with intense rivalry. Wednesday’s historic Test match in Lord's between the sides could not have been more different.

Fans of both countries filtered together into the ground in north London in good spirits, sharing jokes and suncream in the blistering 30 degrees heat. The Irish warmed even more in the face of a first innings batting collapse by the English. Many of the Irish team are familiar with Lord’s, with players William Porterfield and Kevin O’Brien spending time as staff here as MCC Young Cricketers many years ago.

“It’s a big day. I’m delighted that Irish Test cricket has got to this level. We’re really looking forward to it and we’ll enjoy every moment of it,” he said before the Irish served up a Test match special.

The day was also notable for the significant presence of Ireland fans born and raised in England. One such fan is Timothy Hart, whose parents hail from Macroom, Co Cork. He travelled up from Southampton for the game.

“Having been brought up in England I never thought I’d see Ireland play at Lord’s in my lifetime. It’s absolutely fantastic.”

Hart also noted the warm relationship between the two sets of fans.

“The football rivalry is much more intense,” Hart said. “From a cricket point of view I don’t think there’s any animosity between the fans or the players at all.”

The Test represented a “coming of age” for Irish cricket, according to Corkman Pádraig Reidy, an avid cricket fan living in London. He was attending the game with his parents Pat and Mary, who travelled from Cork.

“To finally have a Test at Lord’s is a real coming of age for Irish cricket. For Irish fans, having a near full test is an exciting experience.”

Like Hart, he remarked on the “friendly atmosphere” in the ground.

“As we saw last week with Eoin Morgan, I don’t think any Irish fans resent England. Particularly because Irish cricket fans are so much in the minority, they are followers of the game rather than tribal.”

“Having some big-name players here showing what they can do, and playing in the best setting in the cricket world will hopefully show a lot of Irish fans that there is a lot to Test cricket,” he said.

“Hopefully a decent showing today and more big matches against big teams are going to be what draws people to the game.”