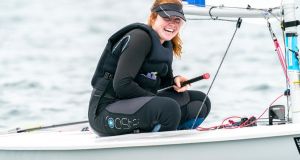 Ireland will be represented at the Tokyo Olympic Sailing regatta next summer following the conclusion of the Laser Radial World Championship in Sakaiminato, Japan, where Tipperary’s Aisling Keller took the seventh of 10 nation place-qualification spots.

Dublin’s Aoife Hopkins also finished inside the qualification criteria, and while both sailors placed towards the back of the overall standings their focus has been to win a place for Ireland at next year’s games.

“I was trying to balance performance and qualification but it was really difficult as the conditions were very changeable,” Hopkins said after racing ended.

“Normal strategy and tactics that you might use to cover the opposition didn’t work so well – you just had to keep your head out of the boat and look for the best strategy for that particular race.”

Both sailors will have time off training but stay in the region before travelling to the Olympic Sailing venue itself for the test regatta, along with Irish sailors in the four disciplines the country is aiming for.