Horton, King and Scott shouldn't have to show respect to someone who doesn't reciprocate 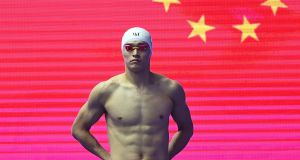 China’s Sun Yang is swimming under a cloud in Gwangju with a doping case against him set to be heard at the Court of Arbitration for Sport in September. Photograph: Manan Vatsyayana/AFP

Fun fact about our family: only one person in my family can swim. My two older brothers can’t, although one is learning, another brother claims he’s self-taught, and my sister just isn’t that interested. My parents are both petrified of the water, and at their age aren’t going to push themselves to get over that fear. So, it’s up to me.

People find it incredibly weird when I tell them that despite having no limbs I am the only one in my family who can swim in the pool, sea and even rivers when the current isn’t too strong.

The Fina World Championship is currently on in Gwangju, South Korea, and for the first time in about 19 years, every victory will be shrouded with doubt and suspicion. There has always been a cloud of suspicion following China’s Sun Yang, who is swimming under a cloud in Gwangju with a doping case against him set to be heard at the Court of Arbitration for Sport in September. With that comes scrutiny upon swimming itself, which claims to be clean and that those caught are always punished.

Sun served a three-month ban for a doping offence in 2014 that was kept under wraps by Fina and the Chinese Swimming Association and emerged only well after it had expired. Sun blamed the failed drug test that led to that ban on medication he said he was taking for a heart condition and did not know was prohibited. His latest doping brush involves an aborted test last year in which he was alleged to have smashed a container holding one of his blood samples with a hammer.

Australia’s Mack Horton finished second to Sun on Sunday, 0.73 seconds away from a gold medal. After the race, he said he was clearly frustrated telling reporters: “I think you know in what respect.” Horton refused to shake hands with Sun on the podium or stand next to him for photographs. Fina later sent a warning letter to Australia’s swimming team and Horton, releasing a statement that said: “While Fina respects the principles of freedom of speech, it has to be conducted in the right context.”

On Tuesday, Team GB’s Duncan Scott followed Horton’s stance, much to the annoyance of Sun, who yelled into Scott’s face “You’re loser, I’m a winner, yes!” Bizarrely, Sun was a loser too, only earning the medal after Lithuanian Rapsys was disqualified for moving on the block.

US swimmer Lilly King, who has been incredibly vocal in the past about drug cheats, also had something to say. When asked about what Fina could do better, King bluntly told reporters they could stop allowing swimmers who smashed blood vials into competitions, while also become more strict on those who have been caught. King also added that every time you get into a pool, you’re always going to be competing against someone who’s taken something.

Swimming was once a sport I loved growing up and regularly tuned in to when it was available on TV. But no more. It’s hard to watch a race with Sun and not get annoyed that he’s winning and rubbing it into the faces of his opponents. It’s hard not to get annoyed when swimmers come out and say the only thing they can do is focus on themselves.

As technology looks like it’s catching up with the dopers, inevitably, the dopers will move 10 steps ahead. Until lip service turns into proper action and words, nothing will be done, and swimming, along with athletics and other sports, will slowly become obsolete and turn into a circus show just like cycling has.

Horton, King and Scott should not have to stand and show respect for those who clearly do not respect them, or the sport for that matter. It takes brave and clean athletes to stand up there and tell everyone that it is complete trumpery, and the result isn’t what it is. Until Fina decides to protect it’s 99 per cent rather than it’s 1 per cent, it’s up to the athletes to defend themselves.