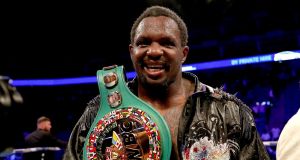 The 31-year-old Londoner is understood to have returned the positive test, which was conducted by UK Anti-Doping, three days before his fight against Colombian Oscar Rivas at The O2 on Saturday.

When testing agencies take blood or urine from athletes, they split the samples into A and B samples, with the latter being a smaller amount used for back-up, re-analysis or verification purposes.

When told about the initial positive, Whyte asked for his B sample to be tested, as is his right, which would not have been possible until this week.

This meant UKAD, the sport’s governing body the British Boxing Board of Control and the World Boxing Council’s chosen testing agency the Voluntary Anti-Doping Agency had little option but to allow him to fight.

In a tweet on Wednesday, promoter Eddie Hearn wrote: “Further to reports I can confirm that both Dillian Whyte and Oscar Rivas were subject to extensive VADA and UKAD testing for their bout. Both fighters were cleared to fight by both bodies and the BBBofC.”

This is true but the context to this is that a positive A sample is only the start of a process that may or may not result in an anti-doping sanction.

To prevent Whyte from taking part in a high-profile contest — and further his claim to a shot at WBC belt-holder Deontay Wilder — at this early stage in the process would have opened UKAD up to a huge legal risk if he is eventually cleared of any wrongdoing.

Last year, UKAD gave Tyson Fury a backdated two-year ban following a disputed positive test in 2015. The agency could have pushed for a four-year ban but, having already spent nearly £600,000 in legal fees, it reached an agreement with the British heavyweight.

UKAD has declined to comment on what happens next with Whyte but, as the B sample almost always confirms the A sample, it is highly likely this case will now be passed to the independent National Anti-Doping Panel.

Whyte, of course, has been through this process before, having tested positive for a banned stimulant after his victory over Hungary’s Sandor Balogh in October 2012.

That was the ninth straight win of the former kickboxing champion’s boxing career but it was his last fight until November 2014, as he was given a two-year ban.

Whyte’s defence at the time was that he had made a silly mistake by taking a popular and readily available training supplement without checking its ingredients — an error made by many athletes over the years but not an excuse usually accepted by the anti-doping authorities and his appeal against the sanction was rejected.

Now, having already served one sanction, Whyte is facing the prospect of a lifetime ban for a second offence.

Since his comeback, he has fought 18 times, losing only once to British rival Anthony Joshua in 2016.