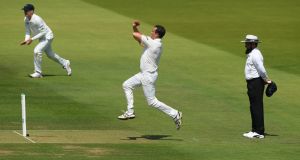 Tim Murtagh glides in to bowl for Ireland at Lord’s. Photograph: Stu Forster/Getty

Feverishly hot as it was at Lord’s, it was a surprise to find all those melting clocks draped over the Mound Stand, the liquescent pocket watches hanging off the Tavern, that lobster telephone ringing in the pavilion. Even Tim Murtagh couldn’t really seem to make sense of what went on this dreamily, surreal morning.

“I’m not quite sure what’s happened the last two hours,” he said as he walked off for lunch, the rubble of England’s batting strewn behind him. He was going to think about it, he said, over a well-earned helping of something sweet in the players’ dining room, vanilla rice pudding and jam, perhaps, or apricot bakewell and clotted cream. Just desserts for the bowler, just deserts for the batsmen.

Murtagh took five for 13 in one long spell from the Nursery End, and England collapsed, in their best slapstick, to 85 all out. Their fans have seen them been bewitched by spin before, and bombed out by pace, here they fell in a heap trying to ward off Murtagh’s wobbly little in-and-out swingers and seamers – so slow, most of it, that any decent policeman would have let him off without a ticket. Murtagh’s is the sort of stuff middle-aged pros have been slinging down in county cricket ever since they invented over-arm bowling and, if it weren’t for a chance conversation with his Middlesex teammate Ed Joyce a few years ago, that’s all he’d be doing with it himself.

Joyce asked him about his Irish surname, and Murtagh explained his grandparents had been born in Dublin before the family moved over to London. Joyce knew the rules, and told his mate that meant he was qualified for Ireland. Murtagh laughed it off, until he got a follow-up call a couple of days later asking if he was interested in coming to play for them. Like every kid who ever picked up a bat and ball, of course Murtagh wanted to play international cricket – only, in his head, it was always for England. But then he knew they were never going to pick him. They hadn’t given him a look-in since he was in the under-19s.

“To be honest I didn’t think I’d be on the away team’s honours board when I first started playing,” he said, “but I’ll take it.”

In an interview with Wisden back in May, Murtagh explained that he felt Ireland might catch England napping in this match. He was right about that. England may be much the better team but Ireland were much the more motivated, and this match – their first-ever Test at Lord’s, a place their fathers could only ever have dreamed of playing at – means just as much to them as that World Cup final did to England a couple of weeks back.

It’s the fixture they’ve been looking forward to since they got Test status in 2017, an opportunity some of their players – such as their 34-year-old captain William Porterfield – had been fighting for all their adult lives.

So while England were thinking about who should play against Australia next week, and which of their players needed a rest in the meantime, Ireland weren’t worried about anything much other than how they would go about trying to win this match.

Murtagh’s opening spell was always going to be a key part of the plan. He has been on the staff at Middlesex for 12 years now, since he moved up from Surrey, and has played 72 first-class games here at Lord’s, almost as many as the entire England team have between them. Since the turn of the century, he has taken 383 wickets here, more than any other bowler has managed at any one ground.

So Lord’s is his home from home, the grass here as familiar to him as that on his back lawn, the slope as comfortable as the ridges of his own sofa. The only difference, this time, was that he had to turn right and make his way to the away dressing room.

Murtagh knew exactly what he wanted to do, because it was the same thing he always does, bowl on a length from the Nursery End, tight up on off-stump, where he can make the ball swing the ball down the slope and – or – seam back up it. England have moved on from this sort of bowling. They haven’t really picked anyone quite like Murtagh since Martin Bicknell last played for them, back in 2003. When you see it done like this, you wonder if they’ve missed a trick.

Murtagh makes an art of a craft. The only time one of his deliveries landed anywhere other than on a good length was when he decided to try and bounce Stuart Broad, and the ball looped through like an underarm serve. Before that, he had Rory Burns caught reaching for a ball that skidded up the slope, across the face of his bat. That was the trajectory of the deliveries that did all the damage to their lower middle order too, had Chris Woakes lbw and Moeen Ali caught behind. Jonny Bairstow, the middle wicket in the five, made a point of trying to bully him by batting a yard outside his crease, but he only managed to chop a swaggering drive into his own stumps.

Whatever else happens in this match now, Ireland will always have that first morning, and this will always be the day they humiliated England at the home of cricket. - Guardian

1 World Rugby study advises removal of reset scrums to reduce Covid-19 risk
2 Sideline Cut: Vignette shows why Bird is the true shark in The Last Dance
3 As news gets better, can the pull of The Field be resisted?
4 Coming fourth in the Olympics didn’t change this fearless quartet, time did
5 How Mary Pierce stepped into the light and played for herself
Real news has value SUBSCRIBE