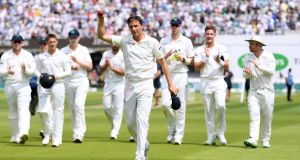 “You couldn’t get a fantasy writer to come up with this”, grinned one delirious Irish fan as day one of the Ireland v England Test drew to a close. “You’d have to get Salvador Dali to paint it - it’s surreal!”

And surreal it was - a side rated at no better than 25-1 by the bookies reduced England to an incoherent mess at Lord’s.

This Test was supposed to be a tuning exercise for England, allowing the world ODI champions to reacclimatise to red ball cricket ahead of the Ashes, which starts next week. But whether Ireland felt affronted by that slight, or by being offered a four-day match instead of the usual five, they certainly made England pay.

Joe Root won the toss and opted to bat, disregarding the lovely green tinge left on the pitch by the Dublin-born head groundsman Karl McDermott. He would have regretted that fairly quickly, maybe as early as the 3rd over, when Tim Murtagh found the edge of Jason Roy’s bat.

Paul Stirling moved smartly to snatch the ball just off the ground at slip, his aerodynamics no doubt improved by the recent removal of his beard. That head-sheering was a shrewd move given the temperatures that soared as high as 33 degrees (C), and which are expected to be as much as five higher on Thursday, perhaps threatening the UK record of 38.5.

There were pre-match concerns that Ireland’s bowlers would wilt in the heat, but they found the best possible solution by ensuring the first innings lasted just 23.4 overs - the shortest England have ever batted in a completed innings.

England’s collapse was started by Mark Adair, who trapped Joe Denly in front for 23, which turned out to be his team’s highest score. Adair’s dream debut continued when he snapped up Root, but it was Murtagh who blew a hole in the innings.

The home ground bowler delivered nine overs of relentless accuracy, nibbling away just outside off stump and letting the slope deceive the batsmen. He was helped by Gary Wilson, who took two screamers, and when he took his fifth wicket Murtagh earned a place on the fabled honours board in the away dressing room.

It’s unlikely anyone secured that honour within 77 minutes, as only one other player - Tom Richardson’s 6-39 in 1896 - ever took a five-for on the first morning of a Test on this ground. Murtagh is the 11th to do so anywhere in the world in 142 years.

At 43 for 7 England were heading for their worst ever total, but William Porterfield needed to rest his strike bowlers and the pressure was reduced. Stuart Thompson had a nervous,and expensive, start, but Boyd Rankin was back to near his best in a spell of 2-5 off three overs.

England’s 85 was abysmal, even allowing for Murtagh. In over 100 Tests at Lord’s only Australia have bowled them out for less.

The shocked hosts would have been keen to make early inroads, but William Porterfield and James McCollum weathered that storm before Ireland’s captain mistimed a pull off Sam Curran’s first ball. McCollum fell soon after for 19, bringing together old Middlesex team mates Stirling and Andrew Balbirnie.

The pair added 87 runs - more than England’s total - with Balbirnie making his second successive Test fifty. But when they went soon after each other they started a collapse that again showed the weakness of Ireland’s middle order.

Of the batsmen on either side who went in five, six and seven, only Kevin O’Brien avoided a duck - Wilson and Thompson falling to debutant Olly Stone and Stuart Broad respectively.

But O’Brien has great experience of keeping the tail together and the last three helped him add 58 to bring the total to 207 and a first-innings lead of 122.

On a day 98 overs were scheduled but only 85 bowled because of the heat, England had to face one over from Murtagh before stumps, which unlike almost every other passage of play on this extraordinary day, passed without drama.

Two-time Major winner Angel Cabrera arrested in Brazil 19:18
Bruce tells Newcastle players from now on ‘we will do it my way’ 19:09
VAT fears eased as Willie Mullins’ Grangee enters UK without charge 19:13
Packers have the quality to overcome resolute Rams 19:00
Bryson DeChambeau says he must relax his brain to succeed 18:00