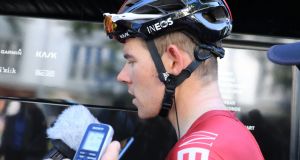 Geraint Thomas’s hopes of defending his Tour de France title were dealt a blow when his Ineos road captain, Luke Rowe, was thrown out of the race, together with his Jumbo Visma counterpart Tony Martin, after the pair had an altercation towards the end of stage 17.

Late in the stage, at the foot of the Col de la Sentinelle, Martin appeared to block Rowe’s path, almost forcing him into a ditch. An angry Rowe then rode alongside the German, pushed him in the face and in turn attempted to force him off the road.

The news emerged two hours after the finish and was described by the Ineos team principal, Dave Brailsford, as “harsh”. Rowe, who as team captain was set to play a pivotal role in Thomas’s bid for a second Tour title, said: “I’m sorry I let the guys down. To come here with this team, a bunch of good mates, I feel like I’ve let them down and of course let myself down.

“We were both trying to do a job. Maybe we both overstepped the mark slightly but it feels harsh to be thrown off the race, both of us. Neither of us deserve that. There are a lot of people supporting you, watching you. It’s pretty hard.”

Brailsford said: “There’s no doubt about it, Tony cut up Luke a little bit, he’s fought for his position a little bit. It’s a harsh decision, maybe a yellow card would have been better, a red for both riders feels a bit severe to me.”

This is the second consecutive Tour in which a rider from Team Sky (now Team Ineos) has been disqualified. Gianni Moscon was kicked off the Tour last year for throwing a punch at a French rider.

Martin’s team leader, Steven Kruijswijk, told Dutch broadcasters that Ineos “didn’t like it that we were riding on the front”.

Asked if tensions between the teams of the main contenders were rising, he said: “I don’t know how many Tours de France you’ve ridden but it does get a bit tense at times. At the end of the day you’ve got to have broad shoulders. It’s no problem. We rode the last 10km of the stage talking to each other.”

After watching the incident at close hand, Julian Alaphilippe admitted he had felt moved to intervene. “There was a lot of tension in the peloton at that stage,” the race leader said. “Everyone wanted to be well positioned. I saw something I don’t like to see, riders too nervous and touching each other. Maybe they were scared I would attack. I just tried to calm them down. I told them, don’t take any risks.”

Thomas said: “It’s the same all the time. Luke and Tony Martin, other guys in other teams, they all do the same job. They’ve got to get their leaders into good positions, so they always end up jostling for position and that’s what was happening. Nothing crazy really.”

But Thomas’s and Kruijswijk’s loss will be Alaphilippe’s gain and the Frenchman threw down the gauntlet to his rivals, stating he will fight to keep hold of the yellow jersey during three mountain stages in the Alps.

“I have never been as motivated as I am to defend the yellow jersey,” he said.

“Physically, I’m as tired as everyone else but mentally I think I’m stronger because I’m going to defend this jersey. They have to make the race hard and explode it, if they want it.”

Alaphilippe’s renewed resolve came as a surprise to some after he seemed close to collapse on Sunday, after the stage finish in Foix Prat d’Albis.

“I guess he wasn’t great a couple of days ago,” Thomas said. “He’s been racing really well so you’d think he’s beginning to get tired and teams will be thinking to make it hard all day. It’s three big days now, so a lot can happen.”

Asked if he was backing himself to win a second Tour, he said: “For sure. I’ve been feeling a lot better but anything can happen.”

Stage 18, the first of three Alpine trawls, takes in the daunting climbs of the Col de Vars, at 2,109m the Col d’Izoard at 2,360m and the towering Col du Galibier at 2,642m, before a long and rapid descent into Valloire. But Thomas acknowledged the subsequent summit finishes at Tignes and Val Thorens could prove more decisive.

“It’s not a summit finish,” he said of the long descent to Valloire, but added: “If you have 30 or 40 seconds over the top it will be hard to bring that back, because it’s not too technical a descent – it’s fast and straight.

“Last year was pretty good in the Alps so if I could so something similar it would be pretty nice. It’s a totally different situation but I’m looking forward to it.” - Guardian