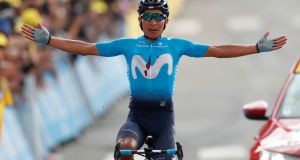 Team Ineos’s attempts to break Julian Alaphilippe on the Galibier served mostly to reopen their own leadership debate as Egan Bernal leapfrogged Geraint Thomas on stage 18 of the Tour de France.

Bernal attacked three kilometres from the summit of the Galibier, the last peak on a brutal 208 kilometres in the Alps, quickly distancing the group of favourites.

But when defending champion Thomas tried his own move one kilometre later, perhaps seeking to bridge to his young team-mate, he served only to drag Thibaut Pinot, Steven Kruijswijk and others with him.

They succeeded in dropping Alaphilippe on the steepest section of the climb, but only temporarily as the Frenchman used his outstanding descending skills to get back on the long descent to the finish, retaining his yellow jersey for a remarkable 14th day.

If these were questionable tactics from Ineos, those questions only multiplied as their co-leaders gave differing answers after the stage.

“We wanted a hard pace and unfortunately we ran out of guys,” Thomas said. “The call was made for Egan to go and that kicked it off. I couldn’t do much then other than follow.

“I had a little dig just to see if anything was going to happen and the guys followed me over the top. It was a good day for Egan gaining some time.”

But Bernal insisted it was Thomas who had told him to attack.

“It was G’s decision,” the 22-year-old said. “He asked me how I was feeling. I said, ‘I’m feeling really good’ so he asked me to attack to try to move the race and he tried to come with me.

“But when he saw the other guys on his wheel he just stayed with them. But I attacked because he asked me to attack.”

On paper, the end result looks good. Alaphilippe may still hold yellow, but Ineos sit second and third, in pole position for when the expected implosion comes. But the impression remains that Thomas’s move limited the gains Bernal might have made by increasing the pace behind him.

“We needed to gain time on Alaphilippe,” Bernal added.

“I don’t care what happened with G. He is my team-mate and we needed to gain time. You never know how the other guys are and if you try to race hard at some point you can drop Alaphilippe and it’s on. I think we did a really good race.”

It is just another way in which Alaphilippe’s sensational run in yellow is changing this Tour, which remains wide open with only two mountain stages left. Throughout the Pyrenees, teams raced as though waiting for him to fall away, but the first day in the Alps produced more proactive attempts to make it happen.

He looked in trouble late on the Galibier, but the 19km descent into Valloire favoured the Frenchman, who flew down the mountainside, not only wiping out his deficit but nosing in front of the pack to make his point.

“I went to the front because I love going fast downhill, and I also wanted to show them that I came back,” the Deceuninck-Quick Step rider said.

Bernal may have clawed back time, but Alaphilippe still leads by 90 seconds, with Thomas a further five seconds back in third.

Jumbo-Visma’s Kruijswijk dropped to fourth, still one minute 47 seconds off yellow and three seconds ahead of Groupama-FDJ’s Pinot. It proved a rough day for Kruijswijk. He saw key lieutenant George Bennett suffer a heavy fall on the final descent after beginning his day with a routine yet high-profile visit from anti-doping officials, who boarded the team bus in the paddock 45 minutes before the stage began, having missed the team at their hotel.

Thomas and Bernal had a similar visit of their own before breakfast, another little added stress before final confirmation came at the start that Luke Rowe’s expulsion from the Tour would not be overturned following Wednesday’s altercation with Tony Martin, who was also disqualified.

The stage victory went to Nairo Quintana, who salvaged some success from the race after his own bid for yellow fell flat. Starting the day almost 10 minutes down, the Colombian was allowed to join a large breakaway.

The group splintered on the Col d’Izoard before Quintana powered away from Romain Bardet and Alexander Lutsenko on the Galibier to claim his third career Tour win, while Bardet had to settle for the polka-dot jersey as the King of the Mountains.

Talking of leadership debates, Quintana’s win moved him up to seventh overall, three minutes 54 seconds off yellow and now a minute ahead of team-mate Mikel Landa, who seemed unimpressed by the idea of working for Quintana over the next two days.

“Pfft,” he said before a long pause. “We will see, no? We have to play it tactically with our riders.”