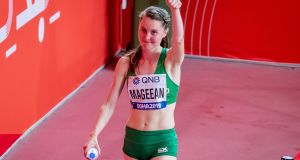 Olympic year, and as opening races go Ciara Mageean couldn’t be much more pleased, breaking her own Irish indoor 1,500 metres record with the promise of more to come.

Running at the New Balance Grand Prix in Boston, and against the backdrop of a giant poster of herself (Mageean is a New Balance-sponsored athlete), she finished third in 4:06.42, improving on the 4:06.76 indoor record set in Athlone last February.

Mageean was also just down from an altitude training camp at Albuquerque, in New Mexico, and declared herself well pleased with her effort, finishing just behind Australia’s Jessica Hull and Konstanze Klosterhalfen, the German athlete coming off a bronze medal in the 5,000m at the 2019 World Championship in Doha.

“To run a 4:06, in my first race, and indoors, I’m over the moon,” said Mageean. “And delighted to finish so strong. They took it out (led by Klosterhalfen for most of the way) at a fast pace, but I kept my head, got myself into the top three in the end there, which I’m happy about.”

Hull also sprinted past Klosterhalfen in the last 25m to take the win in 4:04.14, both those athletes part of the now defunct Nike Oregon Project, shut down after head coach Alberto Salazar was banned for four years for doping offences, although both still live and train in Oregon. Siofra Cléirigh Buttner also clocked an indoor best of 4:16.70 in ninth place, putting her recent injury problems behind her and also promising a lot more for 2020.

Mageean also confirmed she will be skipping the World Indoor Championships in Nanjing, China in March, with only three more races planed in Athlone (February 12th), Madrid (21st), and then the Irish Indoors (March 1st): “Yep, a short and sweet indoor season for me. I’m still getting used to the altitude camp training as well, and everything this year is about working towards Tokyo.” Finishing close behind Mageean were the top two Americans, Cory McGee in fourth (4:06.88) and Heather MacLean in fifth (4:08.12).

Just across town at the Terrier Classic college meeting at Boston University, Andrew Coscoran joined the still elite club of Irish sub-four minute milers, clocking an excellent 3:56.85 – a significant breakthrough for the 23-year-old now running and training with the Dublin Track Club (DTC).

Coscoran ducked and dived for the line and was also awarded with the exact same time as race winner Craig Engels, the American champion and also part of the former Nike Oregon Project. Engels was given the nod only on the photo.

The top five all went sub-four, and for Coscoran also comes with the promise of more to come for 2020. It’s the fastest mile by any Irish runner since Paul Robinson, also part of the DTC, ran 3:54.77 in 2014. and also the fastest indoor mile by an Irish athlete indoors since Ciarán Ó Lionáird ran his 3:52.10 back in 2013.

In the long history of Irish sub-four minute miles, starting with Ronnie Delany in 1956, Coscoran becomes only the 43rd Irish man to add his name to that exclusive list, also marking another breakthrough for DTC under the deft coaching of Feidhlim Kelly.

Also opening her indoor season in sparkling form was Phil Healy, running 23.28 seconds over 200m, also in Athlone, the third fastest by an Irish woman, and just .11 off her own Irish record.