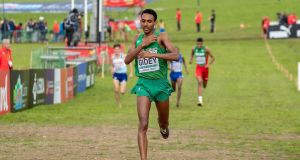 Another year in the life of Efrem Gidey.

Not much has changed since he finished off 2019 by winning a bronze medal at the European Cross Country in Lisbon, his first international appearance for his now adopted country. It set the stage for a day of unprecedented Irish medal success.

Only now Gidey is running with the big boys.

Last Sunday, at the Internacional de Itálica event near Seville, he made his first senior international appearance at the World Athletics Cross Country Permit series. And not for the first time he surpassed expectations, finishing 14th in a properly stacked race that saw USA’s Olympic 5,000m silver medallist, Paul Chelimo, beaten into second place.

“I said to Efrem before the race if he finishes in the top-20, he’d be doing very well,” says his coach Joe Cooper. “It was his first time coming up against some of the big guns. And I expect to see further improvement in the year ahead.”

Gidey has grown up in other ways too. He turns 20 in September, Lisbon being the last time he was eligible for the under-20 grade: his bronze medal – won behind four-time defending champion Jakob Ingebrigtsen from Norway – also came not yet three years after Gidey first arrived in Ireland, in March 2017, from his native Eritrea, via a series of refugee camps including several extended months in the northern French port city of Calais.

The full extent of that experience, says Cooper, may never be known, yet for all the celebrating and goodwill shown to Gidey after his medal win, especially from his club Clonliffe Harriers, there were one or two dissenting voices.

“There were one or two comments on social media, that he was Eritrean, not Irish, that kind of thing. It got back to him, teenagers are like that, and he was little bit hurt. Of course it was just one or two comments, but he’s still only a young lad, coming home with his medal, and the vast majority recognised that, the club putting on a welcome home event.

“I went down to him again the next day, and by chance had a load of loose change in my pocket, put it all down in the table, and said ‘look, you’ll always find one or two bad coins, but the rest are all good. You’ll always have that in life. So concentrate on the good coins’. He got over it alright.”

Cooper, the club captain and stalwart at Clonliffe, is far more than just a coach to Gidey; he’s become a father figure and sort of guidance counsellor since first taking him under his wing, after Gidey started attending at Le Chéile Secondary School in Tyrellstown, west Dublin, where his aptitude for distance running was first discovered.

“When he turned 18, he had to leave the temporary accommodation, over in Mulhuddart, and they came to me and asked was I interested in taking him on. My wife and I are both involved with Clonliffe, and have raised five children of our own, so it was actually one of our own sons, Ian, who has a place down close to the club, who took him in, charging little or no rent. So he has the support network around him now, but he’s getting more independent now.”

Gidey is currently doing a Post Leaving Cert course in health and nutrition, while considering his longer-term options. A number of American colleges have expressed an interest since his bronze medal run in Lisbon, and there may also be some opening at Dublin City University.

His talent, and steady progression, is there for all to see: within a year of his arrival, he won an Irish Schools Cross Country in Waterford, defending it last March. Last May, he broke the 39-year-old Leinster Schools 5,000m record, winning in 14:34:22, before collecting another All-Ireland title on the track in Tullamore.

“Nike recently sent him a kit drop, no strings attached, which just shows that they see the potential in him as well,” says Cooper. “He’s also a very religious young lad, very rarely misses training. He’s a dream to coach, honestly.

“He’s no other family members, besides an uncle in the UK, I believe. All I heard him say one time was he doesn’t know his mother. That gives you some idea. And just from very general talk, around coaching and things like that, I asked him once ‘what was it like in Calais?’, and he just said ‘very bad’. I think we might say it differently, but that’s about all he will say.

“I expect him to break 14 minutes this year, for 5,000m, the other big goal being the under-23 race at the European Cross Country in Dublin, next December. Plenty more look forward to.”