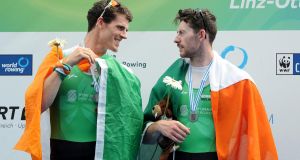 Philip Doyle and Ronan Byrne will be among the favourites in Tokyo. Photograph: Detlev Seyb/Inpho

Ireland’s Olympics-bound rowers rewrote the record books at the Irish Indoor Championships in Limerick on Saturday.

Philip Doyle knocked more than a second off the Irish senior record for 2,000 metres, setting a fine time of five minutes, 51.1 seconds. The Belfast man teamed up with Ronan Byrne to take silver in the men’s double at the 2019 World Championships, and the crew will be amongst the favourites at Tokyo 2020.

Doyle said his form on the ergometer this week had been looking good.

“Myself and Ronan have been showing some really nice form,” he said.

World rowing champions Sanita Puspure and Paul O’Donovan were also in record-breaking mood. Puspure said she was “delighted” with her new Irish record of 6:34.5, because she had lopped almost one and a half seconds off her previous best. Aifric Keogh, with a personal best of her own, was a clear second.

O’Donovan, clean-shaven and revelling in his noisy style on the ergometer, matched Puspure’s feat, knocking 1.4 seconds off his lightweight record. Fintan McCarthy and Shane O’Driscoll were locked in battle behind him and both set personal bests.

“To be ahead of where I was at this time in previous years is promising,” O’Donovan said. He has been deep in his medical studies until recently, when he spent time with the Ireland lightweight squad in Seville. “It was a good camp,” he said.

Gary O’Donovan was ill and missed the event, while the Irish women’s lightweight group were held back, apparently for a later trial.

Illness cut down the competition in the junior women’s race, as Molly Curry missed out. In her absence, Alison Bergin of Fermoy was a clear winner, with Belfast’s Lucy McCoy second and Holly Davis of Lee Valley, who turns 15 this year, third.

The men’s junior 18 race was won by Finn O’Reilly of Skibbereen.

1 Man City to investigate Kyle Walker over lockdown sex party
2 Potential Robbie Keane exit could prove costly for FAI
3 Shane Lowry comfortable in his own skin and out for more Major glory
4 Simon Zebo: ‘It’s been tough not being able to put my hand up to play with Ireland’
5 Stephen Kenny in for ‘unprecedented’ first year as Ireland boss
Real news has value SUBSCRIBE