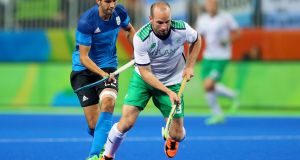 Peter Caruth: lashed his stick in frustration into the fencing at the Merrion Fleet Arena. Photograph: James Crombie/Inpho

Peter Caruth’s injury frustration looks set to continue as he sustained a low-grade hamstring tear in the dying moments of Annadale’s stunning 2-0 win over Monkstown.

The Olympian was set to make his return to an Irish jersey for the first time since June this week for a series against the Netherlands in Arnhem. The strain, however, means he will not travel with the side, adding to a painful year which has seen him miss three world ranking tournaments in 2017.

His frustration was clear to see as he lashed his stick into the fencing at the Merrion Fleet Arena, drawing much derision from the Monkstown crowd, earning a yellow card and a possible hearing for his troubles.

Prior to that player-coach Caruth had been sensational in the shock win against his former club. His run and assist paved the way for David Tremlett to break the deadlock, before Australian import Rhiley Carr nailed a low drag-flick in the second half. It lifts Dale up to seventh place, while Monkstown stay in fifth.

Glenanne’s spectacular start to the campaign continues, meanwhile, as Shannon Boucher scored a last-ditch winner against Banbridge, a 3-2 success. It was the second time this season the Glens have come from 2-0 down to win, giving the Co Down hosts a two-goal start through Fraser Mills and Mark Barlow – his first senior goal.

Boucher started the comeback just before half time, and Shane O’Donoghue levelled from the penalty spot. Boucher smashed home with less than two minutes to go for a big result, keeping Glenanne’s three-point lead intact ahead of their crucial showdown with Lisnagarvey next week.

For Bann it was a seventh loss in nine outings this season in all competitions as the summer departures of Matthew Bell, Jake Rowe and Kyle Marshall have been compounded by long-term injuries to Jonny McKee, Owen Magee and Eugene Magee.